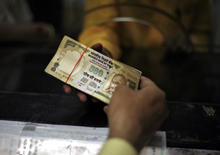 India’s finance minister has pledged to reform the tax system in 2012. It is a promise he needs to keep. Only 3 pct of the Indian population pays income tax and the total take, at 16 pct of GDP, is well below international peers. Anti-corruption campaigners focus on riches parked offshore. But India’s economy will be threatened if New Delhi fails to plug tax holes at home.

India is not the only country with a population that dislikes paying taxes. But in relation to GDP, India’s tax receipts are well below Brazil’s 36 percent, Russia’s 37 percent and the 21 percent taken in China. At the same time India’s fiscal deficit is climbing above 5 percent of its GDP. Meanwhile its total debt is 68 percent of GDP, against China’s 17 percent, Russia’s 8.5 percent and Brazil’s 66 percent.

India’s biggest problem is that not enough of the population contributes to the tax base. Only 35 million people pay income tax from a population of 1.2 billion.

Those at the very top don’t pay enough, either. India raised the issue of black money at the last G20 meeting. But it has yet to follow the lead of many Western governments – including the United States and Germany – to put real pressure on tax havens. A recent report by Global Financial Integrity estimated that between 2000 and 2008 $104 billion was illegally transferred out of India to avoid taxation. That amounts to around one-third of the country’s external debt.

But while the pots of gold in Switzerland may grab the headlines, larger gains would come from nurturing home-grown taxpayers. More Indians may pay tax when, or if, the government completes its overhaul of the tax code. Simplifying processes and lowering tax rates could bring big rewards. Adi Godrej, the next president of the Confederation of Indian Industry, estimates that passage of the new goods and sales tax could actually add up to 2 percent to India’s GDP because it will simplify trade between states, creating a single Indian market with supply chain efficiencies.

Sure most taxes, as well being unpopular, can impede wealth creation and economic growth. Yet long-term development can also be hurt if the tax regime is so flimsy that countries cannot finance spending on necessities such as health, education and infrastructure.

A man deposits his money in a bank in Amritsar.

India’s finance minister, Pranab Mukherjee, laid plans to legislate on tax evasion on Dec. 14. The move came after the issue of “black money”, led by senior opposition leader LK Advani, was raised in the New Delhi parliament.
According to local media reports, Mukherjee will roll out a long-awaited direct tax code, aimed at simplifying archaic tax laws, on April 1, 2012. The new code intends to cut tax rates to bring more people and companies into the tax net. It also aims to phase out profit-linked exemptions for companies and replace them with investment-linked incentives.
India plans to enter into tax information exchange agreements with 17 countries, the finance secretary R.S. Gujral said on Dec. 7. He also said India has sought to amend its direct taxation avoidance agreements with 75 countries.