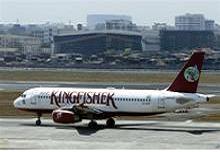 Abu Dhabi’s Etihad Airways is spoilt for choice in India: It could decide to be a white knight to billionaire Vijay Mallya’s beleaguered Kingfisher Airlines. Or the Gulf carrier could snap up a smaller stake in Jet Airways, which controls a quarter of the domestic Indian market. The latter looks the better bet.

On the face of it Kingfisher, whose market value is about one-fourth of Jet’s $960 million, is the cheaper option. It also offers the tempting prospect that Etihad could gain effective operational control through a 46 percent shareholding. But Kingfisher carries additional risks. Its licence was suspended by India’s aviation regulator in October and its employees haven’t been paid for months. Kingfisher’s stripped-down fleet of 12 aircraft is one-eighth of Jet’s capacity.

Etihad’s arrival would have a reasonable chance of convincing the Indian government to reinstate Kingfisher’s licence. However, any equity injection would probably have to go hand-in-hand with Kingfisher’s creditors writing off some more of its $1 billion in long-term debt. That could be tricky: banks are nursing 70 percent mark-to-market losses on the shares they received as part of a debt-for-equity swap in March 2011. Though liquidation would be the worst outcome, lenders will still drive a hard bargain.

An equivalent investment would give Etihad a smaller chunk of better-run Jet, with which it already has code-sharing deals. Whether its overall strategy of buying minority stakes in everything from Air Berlin and Air Seychelles to Aer Lingus and Virgin Australia is viable is a moot question. Etihad cites cost synergies, but the deals don’t necessarily bring big benefits that the airline, which had its first full year of profit in 2011, could not extract without equity injections. Besides, the industry is littered with examples of minority investments gone wrong.

If Etihad succumbs to the lure of India and decides to go ahead with its biggest investment to date, Jet is the better way into a market that is currently stagnant and distorted by high fuel taxes. Kingfisher is just too exciting.

Etihad is eyeing two of India’s airlines as potential targets for investments, the Gulf carrier’s chief executive confirmed on Dec. 11.
Kingfisher Airlines issued a statement saying it was in talks for an equity infusion with the Abu Dhabi carrier after a local newspaper reported Etihad was close to buying a 48 percent stake. A separate source close to the situation said that Etihad is also keen on Jet Airways.
Any deal would be for a minority stake. “We don’t want to take over someone’s airline,” Etihad CEO James Hogan said in an interview with the Financial Times.
Kingfisher’s operating licence was suspended by the Indian aviation regulator on Oct. 20 after it cancelled all flights because of a labour dispute.
On Dec. 13, Kingfisher’s board capped foreign institutional ownership at the current 3 percent level, in order to allow for the possibility of a strategic, foreign investor in the firm.
In September, India allowed 49 percent foreign ownership, including by overseas carriers, in local airlines.