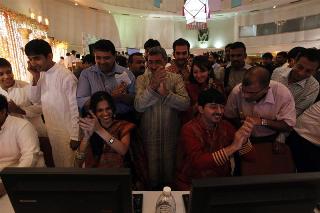 First it needs investors. The Securities and Exchange Board of India’s approval is based on MCX’s submissions that backers MCX and Financial Technologies will cut their combined current stake to 5 percent from 70 percent today, including warrants.

Second it must create ample liquidity for customers. To do that, MCX needs to carve out a slice of business from both the National Stock Exchange and the Bombay Stock Exchange. That’s a tall order when the NSE today claims market share of more than 75 percent in derivatives and about 68 percent in equities.

The task is made especially difficult by question marks remaining over its trading platform. The Dubai Gold & Commodities Exchange, in which in which FT and MCX hold a combined 45 percent stake, recently ditched MCX’s ODIN platform in favour of Sweden’s Cinnober technology. That may require MCX to compete on price, leading to a race to the bottom that damages margins across the industry.

Third MCX needs to repair its image, which has been badly bruised by a protracted battle with regulators for its existence. Espirito Santo has given the FT group a red flag on corporate governance, due to poor disclosure and communications. The market regulator claimed that the exchange’s promoters were “persons acting in concert” and had entered into buyback arrangements with some financial investors while selling their shares to them. The country’s top regulator publicly accused the exchange of being “dishonest in its disclosures.”

True, the Bombay High Court eventually ruled in favour of MCX, and the Supreme Court directed regulators to consider afresh its application. But the reputational damage has been done. As part of its approval of MCX’s ambitions, the exchange must bring in the new investors. The sooner it brings in new high-quality equity partners the better its chances of success.

Stockbrokers during the Diwali special trading session for the 2010 Hindu festival of lights at the Bombay Stock Exchange in Mumbai (photo: Reuters/Danish Siddiqui)

MCX-Stock Exchange won approval from Indian regulators to kick-start trading of stock products, as the bourse operator looks to challenge more established rivals the Bombay Stock Exchange and the National Stock Exchange.
MCX-SX, which had so far focused exclusively on currency futures, will now be allowed to trade equity, equity futures, interest rate futures and wholesale debt products, according to a company statement issued late on July 10.
The Securities and Exchange Board of India approved the entry of the bourse operator into stock trading on condition that MCX, along with its founder Financial Technologies (India) Ltd (FITE.NS), reduce their combined stakes to 5 percent within 18 months, the statement said.
MCX and Financial Technologies have a combined 10 percent stake in MCX-SX, the company web site showed.
The approval from SEBI marks a culmination of a long-drawn legal battle by MCX to kick-start stock trading, as the regulator had delayed approval until it implemented regulations governing the ownership of exchanges.
MCX-SX is promoted by Multi Commodity Exchange of India and Financial Technologies, both of which were founded by Jignesh Shah. FT is providers of financial software for trading terminals and MCX, is India’s largest commodities bourse. It has set up exchanges in Bahrain, Dubai, Mauritius, Botswana and Singapore.
In its 2010 SEBI order, KM Abraham wrote: “I have little hesitation in holding that MCX-SX has been dishonest in its disclosures to SEBI on material information and has failed to fulfill its disclosure and fiduciary responsibilities”. In a letter to the Prime Minister in 2011, Abraham complained that pressure was being mounted on the SEBI by the finance ministry to settle the MCX case.