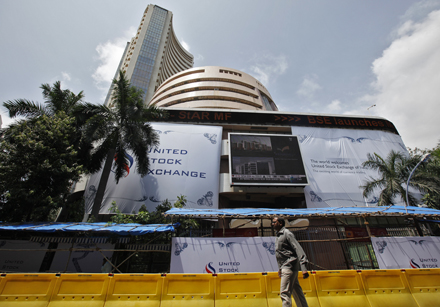 The outlook for Indian stocks is poor. Foreign investors have poured $8.9 billion into the country’s shares so far this year, helping to push up the benchmark stock index in Mumbai by more than 11 percent. But India’s dimming growth prospects don’t justify the optimism.

The problem is policy paralysis: heavy debts and political squabbles are keeping Delhi from doing more to remove supply bottlenecks, while rising food and oil prices are preventing the central bank from cutting rates.

Indeed, India’s recent rally looks less impressive when compared with Asia’s newly booming markets. Hopes that Europe’s debt crisis has abated mean there’s more money to invest everywhere, so it’s natural that some would find its way back to the “I” in BRICs.

Yet while the global climate is less bleak than it was, India’s has gotten worse. The governing Congress Party’s rebuke in state polls this month leaves its coalition too weak to deliver much-needed reforms. The budget it subsequently unveiled underscored its impotence: the government aims to cut the deficit to 5.1 percent of GDP by raising indirect taxes, yet is leaving subsidies largely intact. And the official forecast for 7.6 percent GDP growth for the year ending next April look optimistic.

The government’s efforts to save will nonetheless pose a drag on growth: Citigroup estimates the budget will slice as much as 2 percent off corporate earnings. Yet the central bank worries that increased outlays and higher taxes – combined with rising food and oil prices – will stoke inflation. It has left rates unchanged since last October, despite signs of slowing growth.

Waning confidence is pushing up corporate borrowing costs and hurting India’s rupee, which has fallen 5 percent against the dollar this month. That may be good news for exporters like Infosys. But it’s bad for a country that already has a current account deficit and for the companies that rely on its growth. The benchmark stock index is trading at roughly 14 times projected earnings for the fiscal year that is just ending. Given the risk of future disappointment, portfolio investors would be better off taking their cheap dollars, euros and yen elsewhere.

The Bombay Stock Exchange building at Dalal Street, Mumbai. The acquisition of Enam Securities’ broking business will give Axis Bank a big presence on the country’s equity markets.

India’s benchmark stock index has climbed 11 percent so far this year, lagging behind other regional markets such as Thailand, whose benchmark has risen almost 17 percent, and Japan, whose stocks have climbed more than 20 percent.
India’s rise has been aided by roughly $8.9 billion in net purchases by foreing investors, according to data from Nomura, more than the $230 million they bought in all of 2011 and on track to exceed the $28.8 billion they bought in 2010.