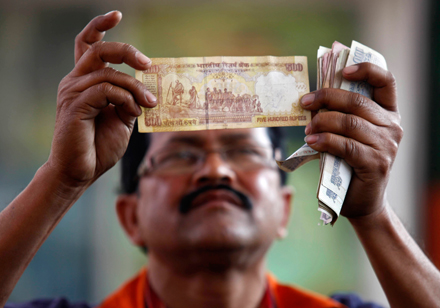 India’s plan to rescue the rupee is sinking.

On Aug. 6, three weeks after the central bank began engineering an increase in short-term money market rates to attract speculators, the Indian currency slid to a new record low against the U.S. dollar. This happened as rising overnight rates led to higher long-term borrowing costs, threatening to cause a fresh spate of bad loans.

The government’s response to the slide has been to make a high-profile appointment: Raghuram Rajan, a former chief economist at the International Monetary Fund, will become India’s next central bank governor in September. His first test will arrive early, when Indian companies seek to replace the 3-month debt they took in June. Any difficulties in rolling over borrowings could cause further alarm.

Meanwhile, India still faces an uncomfortable balance-of-payments question: how will the country finance a current account deficit of 4-plus percent of GDP for a third year if the U.S. Federal Reserve tightens liquidity? Indians living overseas might yet be tapped for a bailout. But New Delhi can’t count on patriotism to solve its problems.

If the financing of the trade gap is suspect, the government’s strategy to narrow the deficit is not very credible, either. Some officials think they can pull off a relatively painless adjustment by squeezing gold imports, curbing consumption of imported crude oil by steadily lowering fuel subsidies, and by restarting iron-ore exports. But narrowing the current account deficit will take a toll on demand. Costlier motor fuel will keep consumer-price inflation elevated at near-double-digit levels and drag down spending on other things. GDP growth will struggle to exceed last year’s 5 percent, already the lowest in a decade.

Exporting iron ore when China’s economy is slowing will at best fetch a couple of billion dollars, when India needs 10 times as much for the rest of the fiscal year. Foreign direct investors can make a bigger contribution, but they are reluctant to bring in funds: manufacturing is barely growing, services output is shrinking, and the regulatory environment remains hostile.

The plan to reduce India’s current account deficit is still half-baked; and hoping to somehow finance the gap cheaply is a desperate prayer. Both might fail.

The Indian rupee fell to as low as 61.80 against the US dollar in Mumbai on Aug. 6, a new record.
India appointed former International Monetary Fund chief economist Raghuram Rajan as head of its central bank on Aug. 6.

The Indian rupee fell to as low as 61.80 against the US dollar in Mumbai on Aug. 6, a new record.
India appointed former International Monetary Fund chief economist Raghuram Rajan as head of its central bank on Aug. 6.