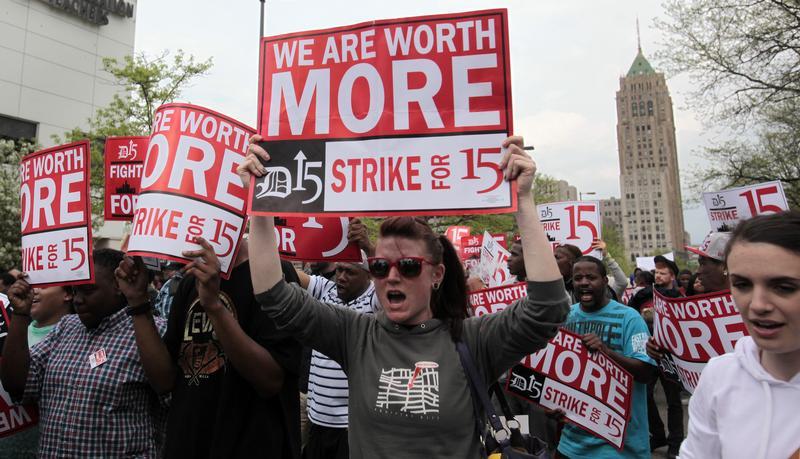 Inflation looks quiescent, but it is still the risk in a tightening U.S. jobs market. Until wages start going up, serious inflation won’t take hold. A leading think tank, the American Enterprise Institute, is even still worrying about the danger of deflation. But there are early hints that employees are beginning to regain some bargaining power.

Hawks have been watching for upward pressure on the consumer price index, especially in the context of the Federal Reserve’s loose monetary policy. But it’s no surprise they’ve yet to find it. Wages represent 52 percent of America’s GDP of $17 trillion, according to data from the Bureau of Economic Analysis, making them the biggest single factor in prices. And overall pay has been subdued over the last eight years, rising at about 2.5 percent a year on average, or just 0.4 percent annually in real terms.

But things are changing. In the year to March, overall labor costs rose 2.1 percent while the CPI rose 1.5 percent, according to Tuesday’s inflation report from the BLS. That’s a real wage rise of 0.6 percent. Though still not enough to ignite runaway inflation, it’s a step up. And wages in a number of higher-paid sectors are running warm, rising more than 11 percent in the past year in mining and logging, for instance, and nearly 5 percent in information services.

For now other sectors are lagging, keeping average wage rises low. But employees’ bargaining power may also finally be on the up. One indicator is the rate at which workers quit their jobs voluntarily. At 1.7 percent in February, this measure was about halfway back from the 2010 nadir of 1.3 percent to the pre-crisis peak of around 2.1 percent. The availability of work, as measured by the job openings rate in the same survey from the BLS, is further along still in its recovery.

If those trends continue, a tight labor market of the kind that existed for several years before the 2008 downturn will be back in the next year or two, and that will feed through into prices. Hawkish types will finally be justified in criticizing the Fed – if, that is, the U.S. central bank hasn’t already started raising interest rates by then.

A group of workers and labor activists march down West Grand Boulevard as they demand a raise in the minimum wage for fast food workers in Detroit, Michigan May 10, 2013. Hundreds of workers in Detroit walked off the job on Friday temporarily shuttering a handful of outlets as part of a growing U.S. worker movement that is demanding higher wages for flipping burgers and operating fryers. REUTERS/Rebecca Cook

The U.S. consumer price index increased 0.2 percent in March on a seasonally adjusted basis, the Bureau of Labor Statistics reported on April 15. Over the last 12 months, the index increased 1.5 percent.

The U.S. producer price index for final demand rose 0.5 percent in March, seasonally adjusted, the Bureau of Labor Statistics reported on April 11. On an unadjusted basis, the index moved up 1.4 percent for the 12 months ended in March.

The Bureau of Labor Statistics’ so-called JOLTS survey, released on April 8, shows that workers quit their jobs at an annual rate of 1.7 percent in February 2014.

The American Enterprise Institute on April 7 released a paper entitled “Now is the time to preempt deflation,” saying falling prices are “a real threat.”

In the year to March, weekly wages grew overall 2.1 percent, according to the U.S. Bureau of Labor Statistics, while prices rose 1.5 percent. Wages in mining and logging rose 11.1 percent, in information services 4.9 percent, and in goods-producing sectors overall 3.4 percent. Pay in retailing was flat and in education and health services rose only 0.3 percent.

In the fourth quarter of 2013, compensation of employees totaled an annualized $8.97 trillion, while GDP totaled $17.01 trillion, according to the U.S. Bureau of Economic Analysis.