From the IMF with love 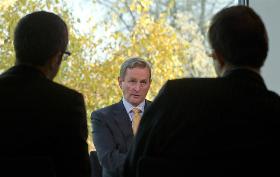 The IMF is urging the euro zone to help Dublin restructure its bank bailout, and warns there are limits to austerity. The Fund is moving to a more pro-active role as bailout partner. With markets slumbering and the crisis abating, Ireland needs all the help it can get.

Irish PM Enda Kenny in an interview with Reuters in Berlin

Ireland expects to return fully to bond markets late next year but needs a deal on easing its bank debt to make sure it can successfully exit its international bailout, Prime Minister Enda Kenny said Dec. 20.
Speaking days before the country takes over the EU presidency, Kenny told Reuters he was confident an easing of repayment terms on the promissory notes, or IOUs, that Dublin pumped mainly into the failed Anglo Irish Bank would be agreed by a March deadline.
He also called on European leaders to stick to a separate promise to look at improving Ireland’s costly bank rescue. “We would hope to be the first country to actually exit (a bailout) in 2013 but that level of support that has been committed to Ireland is very necessary to be carried through”, Kenny said in an interview late on Dec. 19.