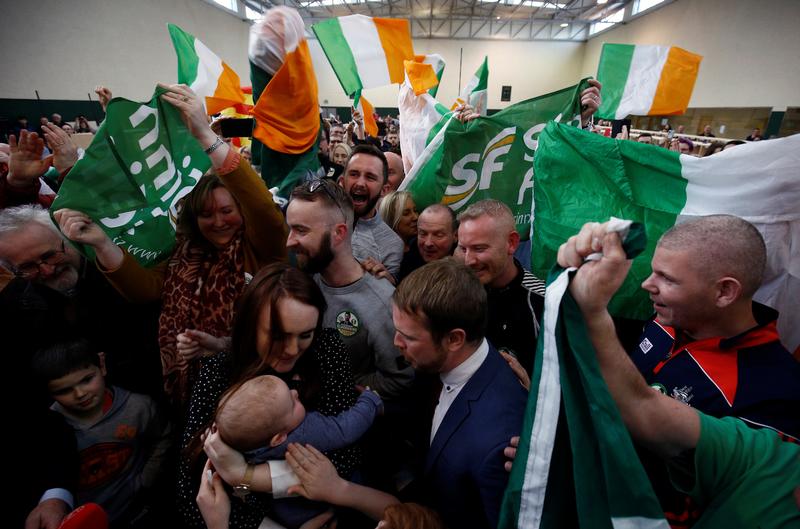 Sinn Fein, which wants to form a coalition government, aspires to unify the island. Even if Irish voters were willing to take on the costs this would entail, their Northern Ireland peers are more ambivalent. Healthcare is higher up the agenda on both sides of the border.

Sinn Fein supporters celebrate the result of voting in a count centre, during Ireland's national election, in Cork, Ireland, February 9, 2020.

The leaders of Ireland’s Fine Gael and Fianna Fail, two of the three largest parties to emerge from a Feb. 8 election, will meet on Feb. 25 for exploratory talks as negotiations to form a government step up.

Fianna Fail’s Micheal Martin wants to try to form a coalition government but has ruled out governing with Sinn Fein, the left wing pro-Irish unity party which won an equal number of seats in parliament.

Sinn Fein’s manifesto states that the country needs to start planning for a unity referendum to reap the “economic benefits” of a united Ireland. The party is planning to draw up a consultation paper and establish a government committee to explore Irish unity.

A majority of voters in Northern Ireland would oppose the region leaving the United Kingdom to form a united Ireland, according to a poll published by the Belfast Telegraph on Feb. 18.

More than half of people in the Republic of Ireland believe there should be referendums on Irish unity north and south of the border within the next five years, according to a poll commissioned by The Irish Times, Irish broadcasters RTE and TG4 and University College Dublin and published on Feb. 9.