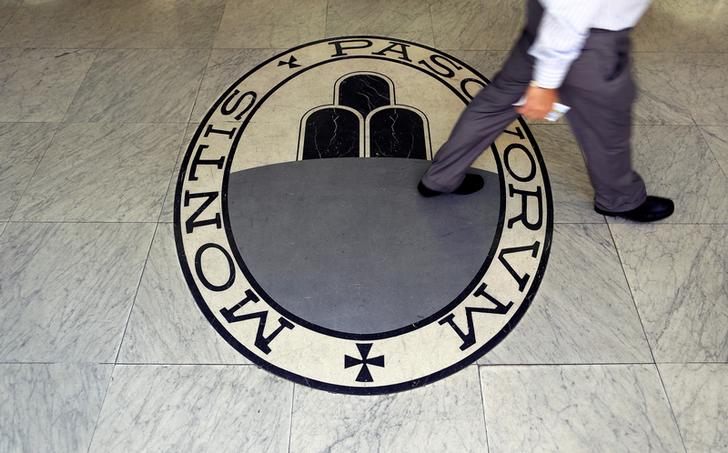 Italian banks may finally be yielding to the imperative of consolidation. Months after largest player Intesa Sanpaolo offered to buy UBI Banca, 68% state-owned Banca Monte dei Paschi di Siena (MPS) is considering a tie-up with Banco BPM, according to Reuters. If it happens, the biggest winner would be the government.

On paper there’s some logic to an MPS-BPM combination, which BPM on Tuesday denied was under consideration. Start with personnel: BPM Chairman Massimo Tononi previously held the same role at MPS, while BPM in May hired Andrea Rovellini, MPS’ chief financial officer, as head of risk management.

The enlarged group, worth 3.8 billion euros using undisturbed share prices, could also slash expenses. Assume it could hack back 5% of combined costs, as Intesa is targeting with UBI. Using a 10% discount rate and deducting tax at 25%, the savings are worth 1.8 billion euros – equal to MPS’ equity value. Crucially, a merger would help the government sell its MPS holding, the product of a 2017 bailout, by giving it a roughly one-third stake in a bigger, more profitable bank.

But BPM investors have less to gain. A large government shareholder keen to sell down its stake would weigh on the new group’s shares. Capital could also be a problem. MPS on Monday agreed to sell a slug of non-performing loans, bringing its common equity Tier 1 ratio down to 11.1%, less than BPM’s 12.9%. And even though the disposal lowered MPS’ non-performing debt ratio to just over 4%, analysts expect it to rack up new bad-debt provisions equal to 1.2% of total loans this year, compared with BPM’s 1%. There’s a risk the combined group needs fresh equity if the economy deteriorates further.

Then there’s MPS’ high cost base and litigation risks, following its near collapse. Operating expenses will be 74% of revenue this year, using Refinitiv data, compared with 65% on average for the five other major Italian banks. The company listed 4.8 billion euros of potential legal liabilities in its 2019 annual report.

Still, BPM’s other potential partners are busy. Intesa is pursuing UBI in a tie-up that would also see rival BPER Banca pick up hundreds of branches. That leaves MPS. BPM investors may have to decide between no deal or a risky one.

A man walks on a logo of the Monte Dei Paschi Di Siena bank in Rome, Italy September 24, 2013.

A potential deal was at the centre of talks on June 30 between Banco BPM’s Chief Executive Giuseppe Castagna and Monte dei Paschi Chairwoman Patrizia Grieco, according to the report. Castagna was seen by Reuters leaving the Monte dei Paschi headquarters in Milan. He declined to answer when asked if he had met Grieco.

The Italian government owns 68% of MPS following an 8 billion euro rescue in 2017. It has promised the European Commission it will reprivatise the bank next year.

Reuters reported that Italy’s finance ministry has drafted a decree, which requires the backing of Prime Minister Giuseppe Conte, authorising it “to proceed with the extraordinary operations” to shed its Monte dei Paschi stake.