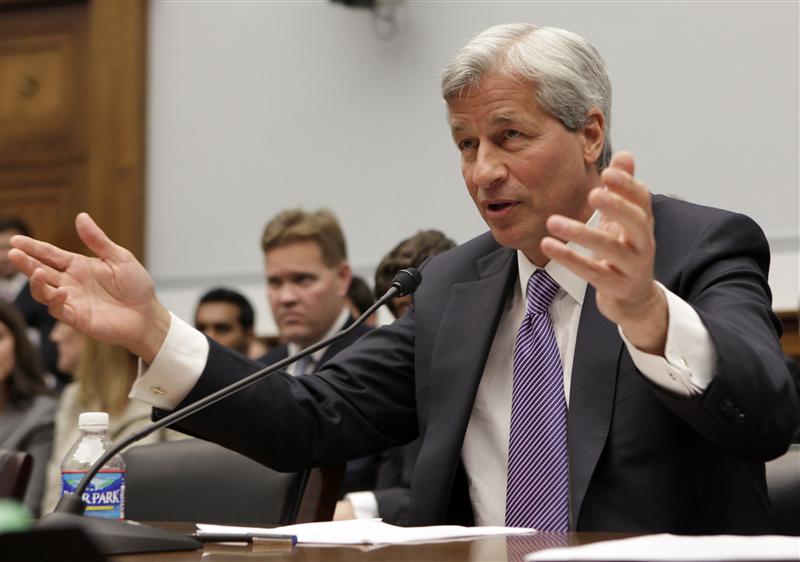 Another day, another pressure point for JPMorgan. The latest rebuke of the U.S. bank’s board arrived on Tuesday from proxy adviser Glass Lewis, which like Institutional Shareholder Services helps investors make up their minds about how to vote at the annual meetings of companies. Both firms are now arguing for JPMorgan to split the roles of chairman and chief executive.

A year ago, making Jamie Dimon relinquish one of the titles would have been a profoundly punitive act. He’d only recently issued a mea culpa over the so-called “whale trade” that revealed the bank’s liquidity management office was effectively being run as a proprietary trading profit center. Though a noticeable blemish on Dimon’s tenure, for shareholders the kerfuffle amounted to a bottom-line blooper.

This time feels different. While there’s no doubt the $6 billion loss served as a reminder of JPMorgan’s complexity, there has been a noticeable shift among the American investing public on the philosophical and practical merits of appointing chairmen to companies that can help guide – and yes, hire and fire – chief executives.

If anything, the mistake in the approach of proxy advisers and other advocates for installing an independent chairman is that they’re approaching the matter selectively. By not issuing a blanket box-check, applicable to all companies regardless of the perceived superhumanity of the CEO, to vote in favor of a split, they do themselves a disservice.

With few exceptions, executives and their boards see a separation of the roles as a punitive response. As with Bank of America and the dearly departed Wachovia and Washington Mutual during the financial crisis, the decision was made to “strip” a title from a poorly performing executive rather than to assist the CEO by providing an able-bodied chairman to provide cover with regulators and shareholders.

It will be evident in a couple of weeks whether a majority of JPMorgan shareholders are swayed by ISS and Glass Lewis, after 40 percent voted to split the chairman and CEO roles last year. Imperial or not, though, Dimon has been a relatively good steward of the bank. A change in title alone would be an odd reason to hasten his succession.

Over time, all big and complicated companies should be governed by a chairman who can make, as Warren Buffett says, the decision about whether the right CEO is in place. To avoid the stigma, it should be all or none in Corporate America.

JPMorgan Chase should have an independent chairman, proxy advisory firm Glass Lewis said on May 7.
The recommendation follows similar advice from ISS Proxy Advisor Services ahead of the bank’s annual meeting on May 21. ISS said the company’s “London whale” trading loss had shown the board failed in its oversight of executives, including Chief Executive Jamie Dimon.

JPMorgan Chase should have an independent chairman, proxy advisory firm Glass Lewis said on May 7.
The recommendation follows similar advice from ISS Proxy Advisor Services ahead of the bank’s annual meeting on May 21. ISS said the company’s “London whale” trading loss had shown the board failed in its oversight of executives, including Chief Executive Jamie Dimon.