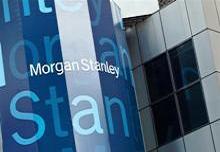 Morgan Stanley eked out a paltry 2 pct return on equity, worse than peers. Fixed income trading was particularly weak. Client concerns ahead of a Moody’s downgrade may have contributed. Either way, the success of CEO James Gorman’s strategy is starting to look shaky.

Morgan Stanley's New York headquarters are seen at the corner of 48th Street and Broadway in New York May 22, 2012. REUTERS/Andrew Burton

Morgan Stanley reported second-quarter net income applicable to shareholders of $564 million, or 28 cents a share, falling short of the consensus estimate of sell-side analysts of 43 cents a share. Revenue was $7 billion compared with an estimate of $7.7 billion. Return on equity was 3.5 percent.

Excluding a $350 million pre-tax gain on changes in the valuation of its own liabilities, net revenue was $6.6 billion and net income was $338 million, equating to a return on equity of 2.2 percent.

The firm put the measurable hit to revenue of the downgrade by Moody’s in the quarter at $225 million.

Compensation as a ratio of revenue for the investment bank was 49 percent after excluding liability valuation gains. Executives expect headcount to be 7 percent lower at the end of the year compared with 2011, implying around 4,100 job cuts. The firm’s overall tax rate was 24 percent.