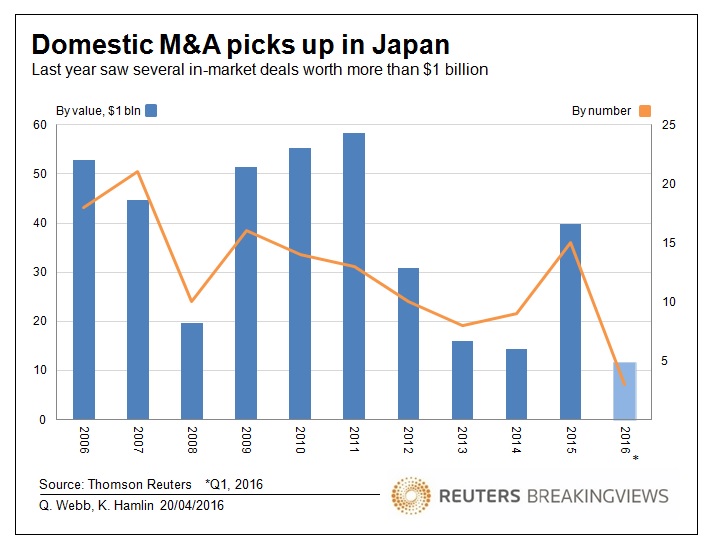 Japan could benefit from setting its deal-making sights on home. Companies have been busy buying overseas when it would make more sense to consolidate fragmented domestic industries. With Japanese firms under pressure to become better-run and more profitable, a recent string of tie-ups could be just the start.

Consolidation was traditionally seen as a last resort for failing companies in the world’s third-largest economy. Corporate rivalries are fierce, and domestic mergers imply painful job cuts. In the last few months, however, Japan has played host to sizeable deals in a number of sectors.

There could be plenty more activity ahead. From Prime Minister Shinzo Abe on down, Japan’s establishment wants to ensure shareholders are treated better, and that companies lift their return on equity from disappointing to internationally respectable.

One obvious lever for bosses to pull would be to take out local competitors. Though many sectors boast one or two heavyweights, a long tail of also-rans that provide unrelenting competition while making terrible returns usually trail behind. The benchmark Topix index includes more than 50 banks with market values of less than $1 billion.

CLSA strategist Nicholas Smith last year laid out how many other industries – from food products and construction to chemicals and car components – were highly diffuse, based on standard measures of industry concentration. That presents an opportunity for deals, especially now that Japan’s anti-trust regulator pays more attention to global competition. And as more workers approach retirement, labour forces can shrink with fewer layoffs.

One motivation for Japan Inc to shop abroad is to escape a shrinking home market. So domestic consolidation is not the answer to every problem. On the plus side, home-grown deals would be cheap – the Topix’s constituents trade on an average of just 12.3 times forward earnings, Datastream shows. Buying in a familiar market reduces risk. And uniting with direct rivals typically brings more cost savings than foreign adventures. All-Japanese deals would be a type of M&A that investors could get behind.

Japan played host to 15 domestic mergers and acquisitions last year worth more than $1 billion, the largest tally since 2009, according to Thomson Reuters data. There were three $1 billion-plus deals within Japan in the first quarter of 2016.

Japan played host to 15 domestic mergers and acquisitions last year worth more than $1 billion, the largest tally since 2009, according to Thomson Reuters data. There were three $1 billion-plus deals within Japan in the first quarter of 2016.