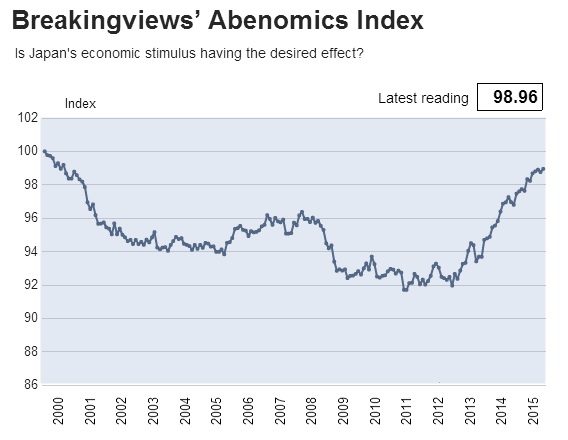 The Breakingviews Abenomics index perked up in July, as summer bonus payments boosted wages. But a muted recovery in consumption, weak manufacturing and slumping housing starts point to anaemic demand both at home and overseas. Expect calls for fiscal stimulus to grow louder.

The Breakingviews Abenomics index hit 98.96 in July, from a revised 98.77 in the previous month. The index, introduced in April 2013, combines 10 different indicators of economic activity and investor sentiment. The July reading effectively implies a 15-year high as the same indicators would not have produced a higher figure for the overall gauge since September 2000.

Japan’s Economy Minister Akira Amari wants the government to consider an extra fiscal stimulus of 2 trillion yen ($84 billion) this autumn, the Financial Times reported on Sept. 8. The economy shrank an annualized 1.2 percent in April-June, less than the initial estimate of a 1.6 percent contraction, Cabinet Office data showed on Sept. 8.