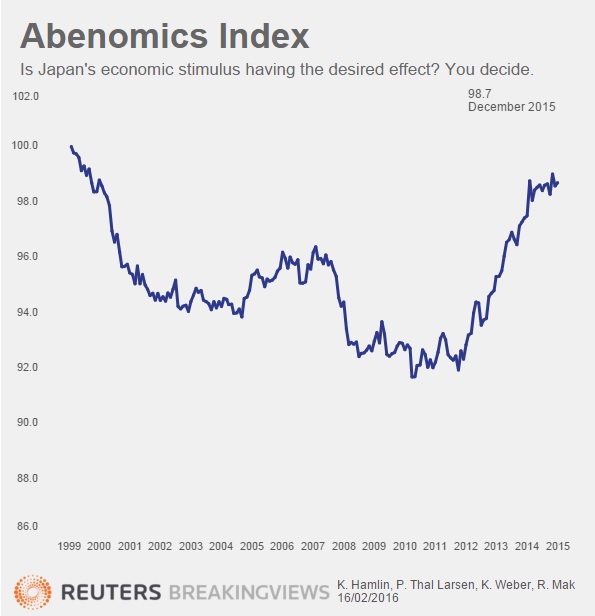 Our index held near a 15-year high in December, underscoring Japan’s turnaround under Shinzo Abe. But this looks increasingly fragile: recent annual gains are among the weakest since the PM took power. Manufacturing and housing are weakening. And market turmoil is a new threat.

Japan’s economy contracted more than expected in the fourth quarter of last year, with gross domestic product declining by an annualised 1.4 percent, compared to the market forecast of 1.2 percent.

The Breakingviews Abenomics Index, an alternative measure of Japan’s economic growth, gave a reading of 98.7 in December. That was slightly higher than November’s revised level of 98.6 and not far off October’s 99.0, the highest reading since 2000. The index was introduced in April 2013, four months after Shinzo Abe took office as prime minister, but includes backdated data from January 2000 onwards.

However, the year-over-year change in the index has dropped to just 1.2 percent in three of the last four months – the lowest since 2013. In the past the year-on-year change has closely tracked Japan’s output gap, a measure of whether actual output is above or below the economy’s potential.