Time to prime the third arrow 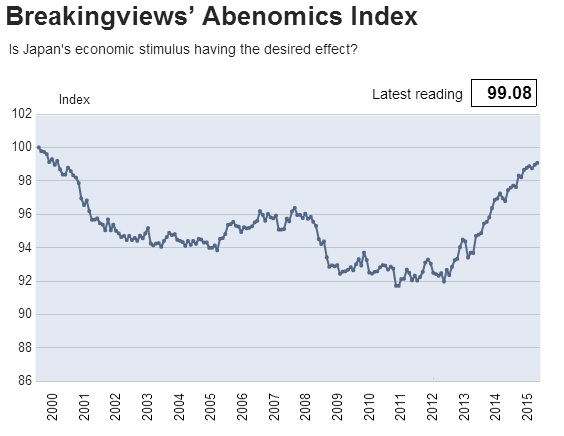 Prime Minister Shinzo Abe’s latest cabinet reshuffle has put his “Abenomics” back in the spotlight. Our index shows why he needs to give reform a fresh push. The summer ended with sluggish spending, flat prices and falling wages.

The Breakingviews Abenomics Index came in at 99.08 in August. This was the highest reading since August 2000, but represents only a slight rise from 98.96 in July this year.

Japanese Prime Minister Shinzo Abe has created a new post for a deputy chief cabinet secretary who will be responsible for trying to raise the country’s low fertility rate, reform the social security system and boost growth, Reuters reported. The move was part of a broader cabinet reshuffle on Oct. 7.

The Bank of Japan refrained from expanding stimulus on Oct. 7.