In a China shop 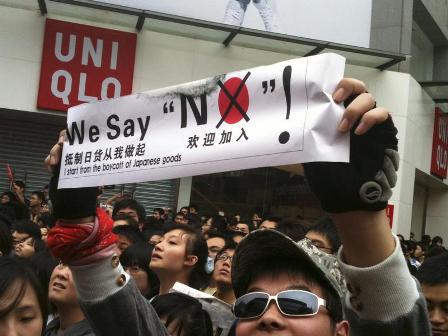 China’s buying habits have taken on an air of the patriotic, at least where Japan is concerned. As tensions rose last year over who owns a group of remote islands, sales of Japanese cars and arrivals of Chinese tourists showed a marked slowdown. Even Chinese acquisitions of Japanese companies fell in the last quarter of 2012.

Consumer patriotism tends to be pragmatic. In China, buyers kept away from Japanese brands when the row over the Diaoyu Islands, as it calls them, spilled into the street. But for low-cost or inconspicuous items, they soon went back to buying products they liked. Japanese fashion retailer Uniqlo, which shuttered some stores during the protests, still plans to open its biggest store so far in Shanghai this year.

More conspicuous investments were hit harder. Japanese auto companies saw a sharp drop in China sales immediately after the protests, when some owners became targets for angry mobs. But even then, emotions fade. Honda sales in China are now returning to growth, and Toyota’s sales grew 24 percent in January, year on year, having fallen 17 percent in December. Japan may have seen 34 percent fewer Chinese tourists in December, according to projections from the Japan National Tourism Organization, but that might reflect fears of geopolitical risk as much as patriotism.

Executives are susceptible to groupthink and few want to go against the political grain. In China, buying companies overseas also means getting the approval of various regulators.

The island spat is far from resolved. Japan’s new Prime Minister Shinzo Abe has taken a robust tone, complaining on Feb. 5 about “continued provocations” against the country’s sovereignty. Such remarks have helped to transform the longstanding squabble into a significant perceived risk for business. It may take executives rather longer than consumers to forgive, or at least forget.

A protester holds a banner with the message of "Boycott Japanese goods" outside a Uniqlo clothes shop from Japan during an anti-Japan protest over disputed islands called Diaoyu in China and Senkaku in Japan, at Chunxi Road business area in Chengdu October 16, 2010. REUTERS/Jason Lee