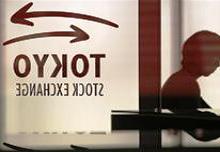 The Nikkei’s 7 pct drop is an overdue correction: the index had risen by two-thirds in six months. What’s striking is that the selloff was sparked by concerns over U.S. interest rates and Chinese growth, not Abenomics. Being a haven for risk-hungry investors has its drawbacks.

A woman walks past a logo of Tokyo Stock Exchange at the bourse in Tokyo May 18 2012. REUTERS/Yuriko Nakao

Japan’s leading equity index, the Nikkei, plunged 7.3 percent on May 23, its biggest one-day percentage drop in two years. Weak Chinese factory data rattled investors, prompting them to take profit from a recent rally buoyed by massive Bank of Japan stimulus measures. The Nikkei ended 1,143.28 points lower at 14,483.98, a two-week low. The broader Topix index sank 6.9 percent to 1,188.34, with a record high 7.66 billion shares changing hands.
Investors sought safety in government bonds, with the 10-year Japanese government bond yield down six basis points at 0.825 percent. The 10-year yield previously hit 1.00 percent, its highest level in over a year. The yen traded at 101.1 against the dollar, up 2 percent, as investors also responded to comments by U.S. Federal Reserve Chairman Ben Bernanke about the possibility of a withdrawal of quantitative easing.