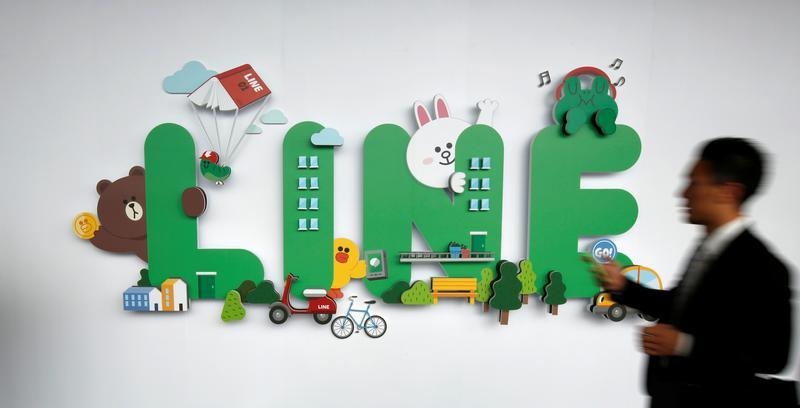 Investors in Japan’s top chat app may want to look at Twitter to see what life as a public company is like. Messaging platform Line is getting ready for an initial public offering with a valuation of up to $6.6 billion. It has attracted 218 million monthly active users with cartoon-like emoticons and games featuring mascots Brown the bear and his rabbit girlfriend Cony. Yet its customer base has almost stopped growing. Like the U.S. micro-blogging network, financial success depends on squeezing more revenue out of the same group of people.

When Line first applied for an initial public offering two years ago its user base had just doubled, spurring chat of a valuation of more than $10 billion. But growth has slowed since. The company signed up just 13 million new users to its chat app and games in the year to March – an increase of 6 percent.

This makes the Tokyo-based group less alluring than some rivals. Facebook-owned WhatsApp hit a billion monthly active users earlier this year. WeChat, part of the Chinese internet group Tencent, expanded its user base by 39 percent to 762 million in twelve months to March. The more users a messaging platform attracts, the more valuable it is to other participants – and to advertisers. Economies of scale also mean that larger apps should be more profitable.

Fortunately, Line is adept at making money from its most committed users, who buy virtual “stickers” and spend money on games. Add in advertising, and revenue rose 40 percent to more than $1.1 billion last year. The company is also pushing into services like payments, mobile telephony and video streaming.

Twitter is in a similar position. About 310 million people logged on in March – 3 percent more than the same month last year. Yet advertising helped lift sales to $595 million in the first three months of 2016, up 36 percent year on year.

Twitter’s market capitalisation of $11.8 billion means each user is worth roughly $38. Line’s IPO implies a valuation of up to $30 per user. To justify that price, Brown and Cony will have to convince the same fans to part with more cash – while persuading advertisers to pay more to reach them.

Line Corp, which operates Japan's most popular messaging app, on June 28 set a price range for a Tokyo initial public offering that could value the company at up to 672 billion yen ($6.57 billion).

Line, which is owned by South Korean internet group Naver Corp, set a tentative price range of 2,700 yen to 3,200 yen a share. At the top of the range, Line could raise 129 billion yen from the sale of up to 40.25 million shares.

The company plans to list in New York on July 14 and in Tokyo on the following day.

Line's messaging app and games had 218 million monthly active users as of March 2016.