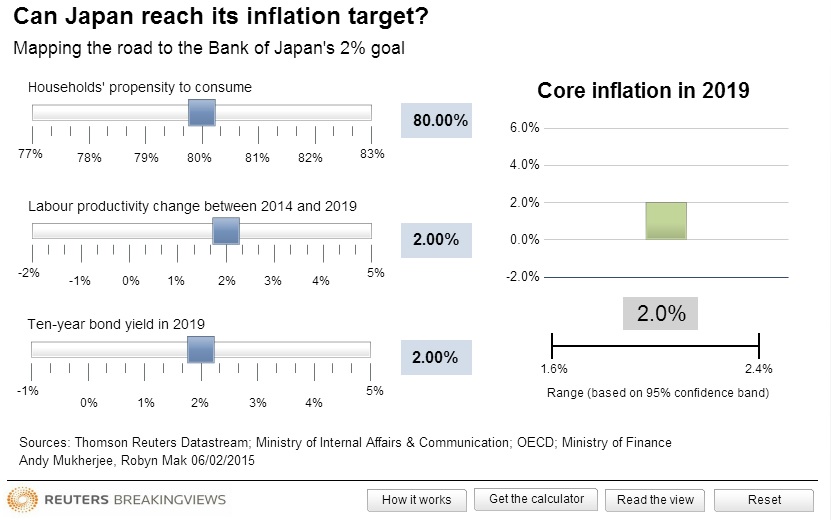 The Bank of Japan has set out on a difficult journey. The central bank can only reach its destination of 2 percent inflation if consumers spend, workers produce and investors remain calm. Missing any of the three signposts could lead Japan astray, as a new Breakingviews calculator shows.

The interactive tool builds on economist Milton Friedman’s idea that inflation is “always and everywhere a monetary phenomenon.” But monetary policy can’t be gauged just by looking at how the economy is doing at present. The longer-term context matters. Higher productivity means people expect bigger pay checks; confident consumers spend more. An ageing population, on the other hand, is inherently deflationary. Monetary policy must respond to changing conditions. Applying that idea to Japan, the road to 2 percent inflation looks bumpy – but not impossible.

Start with interest rates. The BOJ’s huge bond-buying spree has crushed yields: 10-year government debt currently pays investors a measly 0.38 percent a year. Yields will rise as inflation takes hold and the BOJ gradually scales back its purchases. But as long as the yield doesn’t rise above 2 percent the target inflation rate could be hit and maintained.

Of course, if the BOJ is successful and inflation rises, investors could reasonably demand more than a zero percent real return for lending to the state. Much depends on what happens elsewhere. If risk-free rates in other developed nations, particularly the United States, are low, and the yen is expected to appreciate, investors might still be tempted. But as the U.S. economy strengthens, and real returns on dollar-denominated assets improve, the BOJ could get trapped into permanent monetary easing. Only a ridiculously cheap yen, engineered by hyper-aggressive money-printing, would keep Japanese assets attractive.

There is another way to keep yields low, however: the BOJ could promise never to sell the bonds it has already bought. Plus, the Japanese government could curb its high budget deficits so that the supply of available debt securities drops faster than demand. This combination of “helicopter money” and fiscal rectitude would keep a lid on yields.

Low interest rates alone won’t get the BOJ to its destination, however. Households must also be willing to spend at least 80 percent of their income. Japanese consumers are showing early signs of optimism: the spending propensity was 82 percent until November last year. If the measure returns to its 20-year average of 78 percent, however, core inflation will slide.

Households have greater spending confidence if their incomes rise. For lasting wage gains, workers must become more efficient. But boosting the pace of productivity gains could be an uphill struggle. In the 1980s, Japan’s worker productivity grew at an annual average rate of 3 percent. This slowed to 1 percent in the 1990s, and to 0.8 percent in the last decade.

The calculator assumes average productivity growth of just 0.4 percent annually, or 2 percent over the next five years. That’s just as well, because ever since Prime Minister Shinzo Abe was elected in December 2012 on a pledge to end deflation and reinvigorate the economy, Japanese companies have only hired non-regular workers. This has implications for productivity because companies skimp on training the non-regulars. Abe’s pledge of labour market reforms, including allowing more foreign workers, has yet to change corporate behaviour.

Additionally, a planned second increase in Japan’s sales tax rate, which has been delayed to April 2017, could crater demand. That’s what happened after the first tax hike last year. The International Monetary Fund’s current forecast is for the Japanese economy to operate 0.2 percent below its potential in 2017. If that gap widens to the estimated 2014 level of 1.6 percent, inflation will fall.

Rapid ageing also complicates the BOJ’s journey. A greying society has fewer profitable investment opportunities, and a low appetite for credit. Even a slight uptick in real interest rates can make borrowers turn tail, leading to a deflationary savings glut. If the population shrinks faster than the annual 0.2 percent pace expected by the calculator, inflation will lag.

Contrary to what some sceptics believe, Japan should be able to achieve 2 percent inflation if consumers keep spending, workers become slightly more productive, and investors don’t lose their nerves. Nevertheless, the road will be long and far from straight. To see if Japan is moving in the right direction, a map will come in handy.