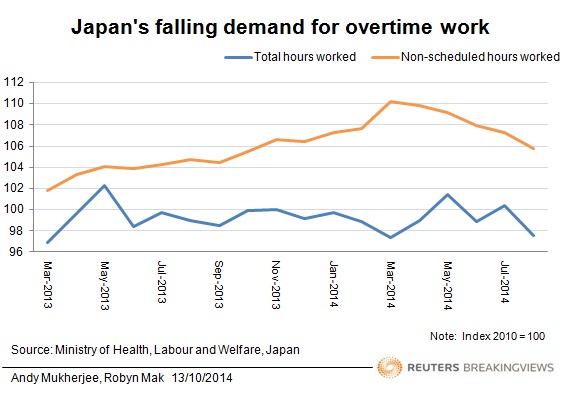 The canary of Japan’s demand slump is singing “overtime”. The country’s low unemployment and high vacancy rates paint a misleading picture of tranquility. A more accurate gauge of the growing nervousness in the economy is the shrinking market for extra working hours.

The jobless rate in August was just 3.5 percent, the best the country has seen since the 1997 Asian crisis. The ratio of job offers to applicants is at its highest since June 1992. Yet an index of “non-scheduled” work has turned sharply lower since the sales tax rate went up on April 1.

This is worrying news for Prime Minister Shinzo Abe, whose efforts at ridding Japan of entrenched deflation are beginning to falter after showing initial promise.

Overtime work is a more reliable measure of anxiety in Japan’s cuddly and calm labour market. That’s because Japanese employers are loath to respond to a demand slump by cutting full-time workers. Instead, their jitters show up when they start asking employees to go home on time. A good example is the global financial crisis: Regular employment in Japan grew 0.8 percent between June 2008 and March 2009. Overtime hours shrank by 20 percent.

Something similar may be afoot now. The 3 percentage point increase in Japan’s sales tax rate has hit consumption. With weak global demand failing to compensate for a shrinking home market, overtime opportunities are disappearing.

That’s a double whammy. Overtime pay, which accounts for 6 percent of the average compensation of Japanese workers, is now growing at its weakest pace since June last year, crimping real incomes just when the higher sales tax and weaker yen are making everything more expensive.

While higher consumption taxes are crucial to fixing Japan’s broken public finances in the long term, the Abe administration still needs to reach into its pockets in the short run. Giving consumers some spending money will help. Besides, future inflation expectations are weak despite this year’s price gains. To defend the credibility of its 2 percent inflation goal, the Bank of Japan might have to expand its monetary stimulus.

The time for a bold response is now. It’s too risky for authorities to ignore the canary’s song.

The International Monetary Fund on Oct. 7 slashed its economic growth forecast for Japan this year by almost half to 0.9 percent. “The negative effects on demand of the consumption tax increase were greater than previously expected,” the IMF said. Japan raised its sales tax rate to 8 percent from 5 percent on April 1.

Japan’s unemployment rate fell to a lower-than-expected 3.5 percent in August, from 3.8 percent in the previous month, according to internal affairs ministry data released on Sept. 30. The jobs-to-applicants ratio was 1.10, unchanged from July when the ratio climbed to its highest since June 1992.