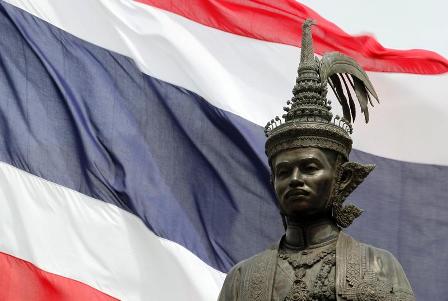 MUFG’s $5.7 billion offer for 75 percent of Bank of Ayudhya depends on Thailand waiving its ownership cap. The Japanese group’s long presence in the country and close governmental links may be enough to prize open the door. Other bidders can’t count on the same reception.

A Thai national flag waves in the wind behind a statue of King Rama VII in front of the parliament building in Bangkok May 10, 2011 ahead of a July 3 election.

Japan’s Mitsubishi UFJ Financial Group has agreed to buy a controlling stake in Thailand’s Bank of Ayudhya, the country’s fifth-largest lender, for up to $5.7 billion, it announced on July 2.
MUFG said it had agreed to launch a tender offer for up to 75 percent of Bank of Ayudhya at a price of 39 Thai baht ($1.3) per share. As part of the deal, GE Capital has agreed to sell its remaining 25.3 percent  stake in the bank to MUFG.
The deal requires approval from Thailand’s finance ministry as foreign ownership in domestic banks is capped at 49 percent. MUFG told a briefing it believes Bangkok would “take a favourable view”.
If MUFG is successful in winning control of Bank of Ayudhya, it is expected to fold its wholly owned Thai branch into the lender.
Thailand’s Ratanarak Group, which founded Bank of Ayudhya in 1945, will keep roughly a 25 percent stake in the bank.
Shares in Bank of Ayudhya closed at 37 Thai baht on July 2.
Morgan Stanley advised GE, while Bank of America Merrill Lynch advised MUFG.