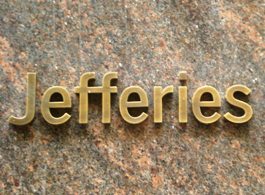 Jefferies is rubbing salt into its own wounds. The Wall Street firm managed to avoid a second straight quarterly loss, but only just. Net income for its first quarter was a dismal $12.5 million as the three months to February exposed some of the investment bank’s weaknesses.

One issue was Jefferies’ futures brokerage business, Bache. It’s losing money and knocked some $7 million off the bottom line. That was largely expected, though. Chief Executive Richard Handler announced in December that he was considering selling or closing the unit, because it suffers from “growth and margin problems.” It’s an industry-wide dilemma: Even the big futures brokers are struggling to turn a profit, as JPMorgan pointed out at its investor day last month.

More worrying is Jefferies’ performance in fixed-income trading. Handler described results for the three months to February as “tepid.” That’s an understatement: They were 56 percent lower than during the same period last year.

Mega-bank Citigroup reckons it’s set for only single-digit declines for its quarter, which runs to March. And much of that may come from one standout event: its forex desks lost perhaps $150 million on the day the Swiss central bank ditched its peg to the euro. Meanwhile, JPMorgan’s investment banking chief, Daniel Pinto, last month described the first few weeks of the trading year as “very strong.”

Volumes in virtually all fixed income products were higher in the first two months of this year compared with 2014, according to data collated by Credit Suisse. That suggests Handler’s firm simply missed the recovery.

Jefferies’ debt capital markets teams also had a bad few months, with revenue plummeting 65 percent. In fairness, the market has been tough for everyone. Deal volume in February alone fell by almost a third. But leveraged loan volume – a product Handler specifically mentioned – crashed 82 percent in February from last year. Jefferies has made a push into that area as regulators have clamped down on larger lenders offering too much easy credit. But it seems the bank has become, in the short term at least, overly reliant on the business.

Handler needs to show he can do better than eking out a 1 percent return on equity after losing $93 million the prior period. Another quarter like the last two is more than he can afford.

In explaining the results, Chief Executive Richard Handler and Chairman of the Executive Committee Brian Friedman said: “We experienced a slow first quarter due to a tepid fixed-income trading market and fewer new issues in leveraged finance capital markets.”

In explaining the results, Chief Executive Richard Handler and Chairman of the Executive Committee Brian Friedman said: “We experienced a slow first quarter due to a tepid fixed-income trading market and fewer new issues in leveraged finance capital markets.”