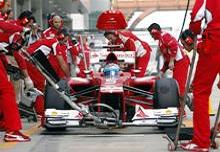 The cable tycoon offered to buy a stake in Formula One last year. His recent focus has been on distribution, not programming. But the taste for motor racing highlights live sport’s must-have status in content. If he wants it, he can expect an auction and a $10 bln-plus valuation.

John Malone, the U.S. media investor, approached CVC about buying a stake in Formula One late last year, but was rebuffed by the private equity firm because his offer was too low, people familiar with the matter told Breakingviews. CVC owns 35.5 percent of the motor-racing group.

The New York Post, which first reported the story, said Liberty Global, Liberty Media, and Discovery Communications were working together to buy as much as 49 percent of F1, which it said was worth $7 to $8 billion. Malone owns stakes in all three companies. Liberty Global and CVC declined to comment.

In May 2012 CVC sold 21 percent of Formula One to two U.S. money managers, Waddell & Reed and BlackRock, and Norway’s sovereign wealth fund, for $1.6 billion in cash. The deal gave Formula One an equity value of $7.2 billion, or an enterprise value of $9.1 billion including $1.9 billion of debt, according to FinanceAsia. It halted a planned Singapore initial public offering a few days later, amid weak markets.

In October 2012, F1’s shareholders raised an extra $1 billion of debt to pay themselves a dividend by selling a privately placed high-yield bond, according to Thomson Reuters Loan Pricing Corp (LPC).