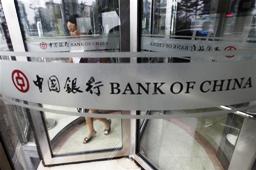 Four of the world’s seven largest banks by market capitalisation are Chinese. Yet only Bank of China made it onto the list of 29 global systemically important financial institutions (G-SIFIs) published last week – and it was only included at the request of domestic regulators. Though the label might be seen as a burden, it could be a bonus.

Given regulators’ determination to end the “too big to fail” problem, it might seem strange to push for a bank to be included. But Beijing, which wants to have a bigger say in global finance, might have lost face if none of its giant lenders were deemed as systematically important as those from the developed world. Having a G-SIFI gives China a front-row seat at the high table of global banking regulation.

Bank of China fits the bill. Although it is the smallest of the country’s “Big Four” lenders by assets, it is also the most global, with a history as the main manager of China’s foreign reserves. Foreign assets still account for about 30 percent of its balance sheet.

Even these attributes did not automatically qualify Bank of China as a G-SIFI. The ranking is based not just on size and international spread, but also on factors such as complexity and dependence on short-term wholesale funding.

However, the benefits of being designated a G-SIFI outweigh the costs. The main impact is that Bank of China has to hold core Tier 1 capital of 8 percent of its risk-weighted assets, higher than the 7 percent minimum. But its core capital was 9.9 percent at the end of September.

Being seen as more closely regulated might help Bank of China win business abroad. G-SIFIs also have to draw up detailed plans for how they could be wound down in a crisis. Even though it’s hard to imagine that Beijing would allow Bank of China to fail, the new status may add another layer of comfort.

Investors worried about the asset quality of Chinese may find it comforting that none of them are yet deemed capable of causing a global systemic crisis. But if Bank of China benefits from its new status and others join the club, that may change.

A woman leaves a branch of Bank of China in Beijing

The Basel Committee on Banking Supervision on Nov. 4 released its list of systemically important financial institutions (SIFI). The 29 banks appearing on that list includes Bank of China, the country’s fourth-biggest lender by assets, which is the only bank from emerging markets on the list.
China’s banking regulator has recommended Bank of China to be included in that list, though it doesn’t have to be included, according to China’s Caixin magazine.
According to the Bank for International settlements, two banks were added to the list at the request of their domestic regulators.
Under Basel guidelines, global SIFIs (G-SIFIs) will be required to boost their core Tier 1 capital ratio by between 1 percent and 2.5 percent, based on factors including size, international spread and complexity.