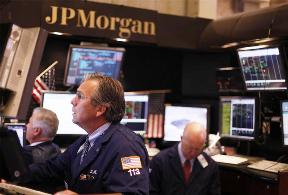 Jes Staley is not going to be popular in Wall Street’s trading brotherhood. The head of JPMorgan’s investment bank has broken a code of silence by revealing how much the firm rakes in as a market-maker.

Shareholders will consider that a smart move. The new disclosures at the bank’s investor day on Tuesday gave them needed insight into the trading tricks investment banks typically keep under wraps. Banks usually bundle their 25 or more fixed income, currency and commodity products into just one revenue number, perhaps adding a little data-light color during earnings calls. Aside from that, all investors have to go on is trading desk gossip.

Goldman Sachs revealed a sliver more last year by divulging the pre-tax margin for its trading unit as well as for its other major businesses. But Staley has, as he put it, “opened the kimono” much further by breaking out the average revenue per trade the bank earned last year in 11 major FICC products and four equities ones.

Interest-rate swaps came top at $12,000 a pop. Trading loans or asset-backed bonds brought in $10,000 a time. These amounts reflect illiquidity or the fact the trades are tailor-made for clients, in both cases leaving the middleman with extra risk. Foreign exchange spot and forward trades were the least profitable per transaction at just $70. But they’re also the most popular, at five million trades a quarter, and mostly done electronically at low cost.

This gives investors useful extra information to include in their models. JPMorgan, which may only want to release the data once a year, is taking the risk that analysts and shareholders will push for more frequent updates, and for more detail.

But the bank, headed by Jamie Dimon, is also sending a message to regulators and lawmakers by offering a peek inside the trading magic circle. All the data points reflect deals with clients, not other banks. And they represent 70 percent of trading revenue, with the rest coming from net interest income, prime brokerage and other client businesses. In other words, Staley is trying to show a skeptical audience that banks – well, JPMorgan at least – provide valuable services rather than indulging in trading for their own account.

There’s probably not yet enough information to quell lingering suspicions that Wall Street still engages in some proprietary trading. But Staley’s looser kimono is usefully revealing all the same.

Traders work in the JP Morgan company stall on the floor of the New York Stock Exchange in New York. The bank’s Q3 earnings came out this week, with investment banking revenues coming in under expectations.

The bank also revealed that 25 percent of its fixed income trading revenue stemmed from just 0.14 percent of trading volume, for which the firm received $500,000 or more for each trade.

Additionally, Staley said he expected the investment bank’s return on equity to stay around 17 percent, the same level it achieved in the past two years.
The dropped words “fixed income” have been added to the second paragraph above.