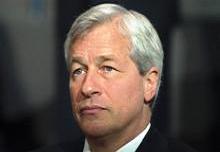 It takes a lot for Citigroup and Bank of America to make JPMorgan look deficient. Jamie Dimon’s Paleolithic board does just that, though. Last week’s protest vote and the rising losses from knuckle-headed trades at its chief investment office highlight the need for JPMorgan to recruit some new directors to help keep the boss on his toes.

As the bank built up trades that may cost shareholders over $2 billion, JPMorgan’s board members were getting too nestled in their seats. Until last week’s shareholder meeting added a fresh body, JPMorgan directors had served an average of more than 12 years. Only one director had joined since the financial crisis of 2008 delivered the biggest shock in a generation.

By contrast, BofA and Citi have made substantial changes, albeit because they required government bailouts. Most of Citi’s 12 directors, including a former New York banking superintendent and president of the Philadelphia Fed, joined post-crisis. And eight of BofA’s 12 directors are new since 2007, including a former FDIC chairman, Fed governor and top executive at Morgan Stanley. Both banks also separated the CEO and chairman roles, something 40 percent of JPMorgan shareholders voted to do last week.

More specifically, JPMorgan’s risk policy committee looks short of modern financial acumen. Its chairman, James Crown, has been on the board for over two decades. As the president of Henry Crown and Co, an investor in JPMorgan and General Dynamics, he’s no dupe. But his last relevant stint in finance was at Salomon Brothers in the 1980s.

David Cote, the chairman and CEO of Honeywell International, another committee member, is no shrinking violet. But it’s hard to see how he complements Crown’s gaps with, say, complex securities. Ellen Futter is, somewhat fittingly given the board’s collective tenure, president of the American Museum of Natural History.

Even the sharpest bunch might not have prevented the bank’s bad bets. But executives with stronger, more current, financial knowledge also might have asked more probing questions about the CIO. Comfortably navigating the crisis kept attention off the entrenched JPMorgan board. That’s an oversight by Dimon, the chairman, and shareholders that can no longer be ignored.