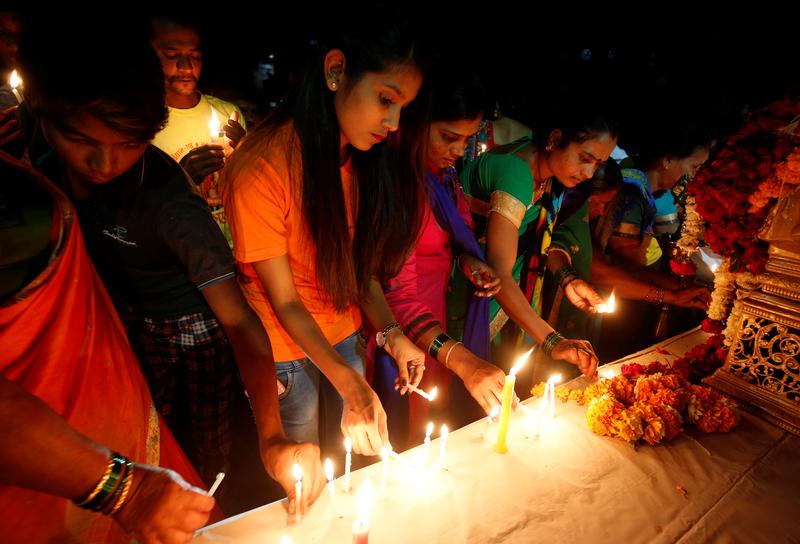 New Delhi has vowed to secure the “complete isolation” of Pakistan after one of the deadliest assaults in years. Yet Islamabad’s strategic value to Beijing and Riyadh makes that unrealistic, leaving Premier Narendra Modi with few options to show strength ahead of an election.

People light candles at a memorial during a vigil to pay tribute to Central Reserve Police Force (CRPF) personnel who were killed after a suicide bomber rammed a car into the bus carrying them in south Kashmir last week, in Ahmedabad, India, February 19, 2019.

Pakistan Prime Minister Imran Khan said on Feb. 19 that the country was ready to cooperate with India’s investigation into a suicide bombing in the disputed Kashmir region, but he warned of retaliation if attacked.

Pakistan-based militant group Jaish-e-Mohammad claimed responsibility for the Feb. 14 attack on a security convoy which killed 40 paramilitary police. The Pakistani government has denied any link to the blast.

Indian Prime Minister Narendra Modi has come under domestic pressure to exact revenge, and has said he has given a free hand to security forces to administer a "strong response". Finance Minister Arun Jaitley said on Feb. 15 that India would work to ensure “complete isolation” of Pakistan.

Jammu and Kashmir, a former princely state on the border between India and Pakistan, has been a source of dispute since the partition of India in 1947. Control is split between the two countries but each claims the region in full.