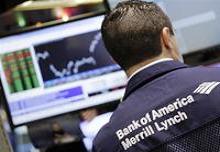 The ex-CEO is paying $10 mln and is banned from top public company posts for three years to settle charges over BofA’s purchase of Merrill Lynch. It’s not much, especially with the bank adding another $6.3 bln in legal costs. But it’s a rare example of personal accountability.

A trader for Bank of America Merrill Lynch works on the floor of the New York Stock Exchange December 2, 2010. REUTERS/Brendan McDermid

On March 26, Bank of America and former Chief Executive Ken Lewis reached a settlement with the New York Attorney General over charges that they misled shareholders when buying Merrill Lynch in late 2008.

Lewis will pay $10 million – which BofA will cover – and will be banned from serving as an officer or director of a public company for three years. Bank of America will pay $15 million to settle its portion of the charges. It will also adopt certain reforms including creating a special committee to review large acquisitions, Reuters reported.

Neither Lewis nor Bank of America is admitting any wrongdoing or paying damages.

Also on March 26, Bank of America announced it had reached an agreement with the Federal Housing Finance Agency, which oversees Fannie Mae and Freddie Mac, to settle mortgage bond claims. The bank is paying $6.3 billion in cash and buying back $3.2 billion of bonds at fair value.