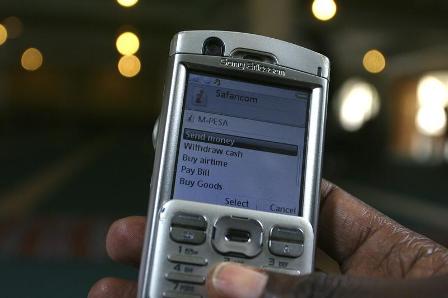 Vodafone’s Indian arm is launching a local version of the service that has been a hit in Kenya. The government’s push to broaden access to banking services means the plan is well-timed. But financial regulations and fierce competition stand in the way of widespread adoption.

A man scrolls through his mobile phone to carry out a money transaction via M-PESA in Nairobi May 12, 2009. Teaming up with Kenya Commercial Bank to let phone users who do not have bank accounts send each other money, M-PESA, the virtual cash network, hit on a formula that has attracted 6.5 million customers, or one in six Kenyans, in just over two years.

Vodafone India and ICICI Bank, India’s largest private sector bank, on April 17 announced the Indian launch of M-Pesa, the SMS-based mobile payments service.
Following a pilot trial last year, M-Pesa is now available to around 220 million people in eastern India. The service, which allows users to make deposits and withdrawals, transfer funds and pay bills, is expected to be expanded to the rest of the country.
M-Pesa was launched in Kenya by the country’s largest mobile phone operator, Safaricom, in partnership with Vodafone in 2007. As of March 2012, 14.6 million out of Safaricom’s 19 million customers are active users of M-Pesa, in a country of 42 million people. Since its launch in Kenya in 2007, M-Pesa has been rolled out in eight countries.
Despite a high number of mobile phone subscribers in India - 861.7 million as of February 2013 based on figures from the Telecom Regulatory Authority - mobile payments and mobile money have yet to take off nationwide. So far, Bharti Airtel is the only major mobile operator to have launched large-scale mobile payment systems in partnership with banks.
In a speech made in December 2012, Finance Minister Palaniappan Chidambaram stated that financial inclusion is a key area of focus for the government and that access to banking services a right of every citizen.
Vodafone estimates that approximately 700 million people in India have no access to conventional banking facilities.