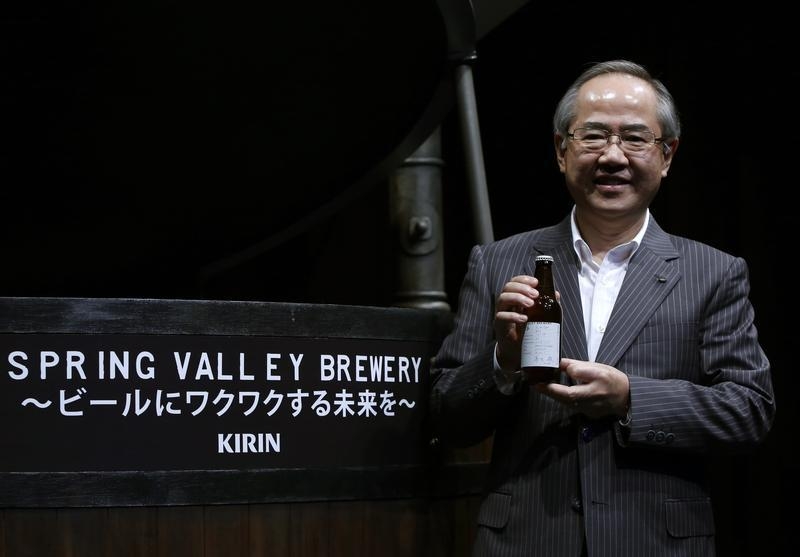 Kirin has found a crafty little distraction in New York. The Tokyo group faces big structural and strategic issues. But buying 24.5 percent of Brooklyn Brewery – a purveyor of ales and lagers to tattooed, bearded and bicycle-riding types – should at least help keep Kirin on top of the craft-beer revolution as it belatedly hits Japan.

In absolute terms, this is small beer for the $15 billion Kirin. No details were disclosed but the Nikkei newspaper reckons it cost a few billion yen, i.e., tens of millions of dollars. Closely held Brooklyn made $50 million in sales in 2013, according to Business Insider.

However, the tie-up underscores a couple of broader trends. It is the latest instance of a big brewer co-opting the cooler image and stronger flavours – not to mention faster growth and higher prices – enjoyed by such independent outfits. Kirin, losing ground at home to arch-rival Asahi, has already taken a stake in local outfit YO-HO Brewing and launched its own Spring Valley brand.

This also highlights how fancier beers, popularised in Boston and Brooklyn, are now spreading further afield. Craft beer accounted for 12 percent of the U.S. market by sales and 21 percent by value last year, but just 0.7 percent of sales in Japan, Nomura analyst Satoshi Fujiwara says. It seems a safe bet that proportion will rise. So this is a logical move for Kirin – especially as Japan’s population ages and shrinks, and the era of the pilsner-downing salary man recedes into history.

Of course, this micro-deal does little to fix Kirin’s bigger headaches. The group looks subscale in the “megabrew” era ushered in by Anheuser-Busch InBev’s purchase of SABMiller. And yet it also manages to look unfocused, with a 50.1 percent stake in $9 billion drugmaker Kyowa Hakko Kirin, which is also listed in Tokyo. Meanwhile, opportunities to grow overseas through deals are limited and expensive, and Kirin is still trying to fix the problems caused by its terribly timed 2011 acquisition of Brazil’s Schincariol.

At least dabbling with Brooklyn Brewery won’t leave it the same kind of hangover.

Kirin and Brooklyn will set up a 60-40 Japanese joint venture next year to roll out the Brooklyn brand, as well as potentially developing original products for the Japanese market and launching a restaurant business.

Kirin Brewery President Yoshinori Isozaki holds its new craft beer product "Spring Valley Brewery 496 prototype", which will be improved by feedback from customers through online communication, as he poses during a news conference to launch the new project "Spring Valley Brewery" in Tokyo July 16, 2014. Kirin Holdings Co plans to be the first of Japan's biggest brewers to embark on a major push into craft beer, in the company's latest effort to stem a long-term decline in market share. REUTERS/Yuya Shino (JAPAN - Tags: BUSINESS SOCIETY) - RTR3YUQW

Kirin and Brooklyn will set up a 60-40 Japanese joint venture next year to roll out the Brooklyn brand, as well as potentially developing original products for the Japanese market and launching a restaurant business.