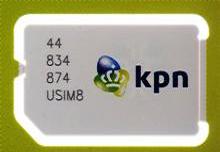 KPN has engineered a fully valued retreat from Germany. The Dutch telecoms group is selling its E-Plus mobile unit to Telefonica Deutschland, the local unit of the Spanish telecoms giant. KPN reckons the cash and shares transaction values the business at 8.1 billion euros ($10.7 billion) or 9 times 2013 EBITDA. The exact number is open to debate. But the price is rich by sector standards and gives KPN a good chunk of the hefty synergies.

The 8.1 billion euro value may be slightly overcooked. That is because KPN uses the price at which it resells Telefonica Deutschland shares to value its remaining equity stake. In reality, the holding’s worth depends on how the market values Telefonica Deutschland, which is and will remain separately listed in Frankfurt. For KPN’s stake to be worth 3.1 billion euros, the German group’s trading multiple would need to expand from 5.5 to 6.5 times EBITDA, Breakingviews calculations suggest, using pro-forma 2013 estimates.

Those doubts aside, the deal makes sense. It is also heartening for investors in Europe’s fragmented, cut-throat, and heavily regulated telecoms industry. They have watched valuations collapse and dividends evaporate. Consolidation is an obvious solution. But companies have been busy firefighting. And the European Union is keen to ensure markets remain competitive. If this deal is permitted, it will show a more pragmatic stance from Brussels.

A sim card by Dutch telecoms group KPN is seen in Haarlem May 31, 2012. REUTERS/Paul Vreeker