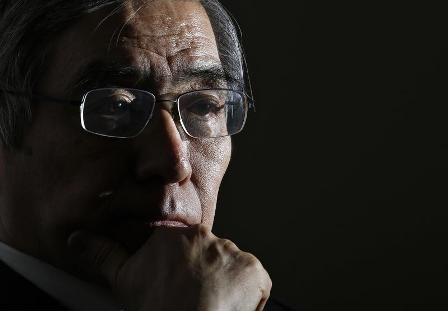 The Bank of Japan’s new chief has dumped his predecessor’s timid script. Haruhiko Kuroda has crafted an ambitious new plan to end the country’s chronic deflation.

The BOJ has long had its policy rate at zero, so it cannot cut. But it can print money, and at its April 3-4 policy meeting, Kuroda’s first as governor, it decided to do so – in scale. The monetary base, the sum of currency in circulation and commercial banks’ reserves with the BOJ, will double in just two years, from 138 trillion yen at the end of last year to 270 trillion yen by the end of 2014.

The newly created funds will be used aggressively. Previous Governor Masaaki Shirakawa had a squeamish preference for buying less risky, shorter-dated securities. Kuroda will even buy government debt maturing in 40 years. The BOJ will also “temporarily suspend” a 12-year-old self-imposed rule, which calibrated the central bank’s holdings of government debt to the value of banknotes issued by it. The rule limited the BOJ’s purchases of longer-dated bonds.

The BOJ’s aggression will make emerging-market policymakers squirm as cheap yen liquidity pours into their shallow asset markets. Advanced nations, as well as China, will accuse Japan of launching a currency war. But cheapening the yen to promote new investments in export-oriented industries is crucial for Japan to slay its deflation scourge.

Now that he has embraced Prime Minister Shinzo Abe’s anti-deflation mandate, Kuroda must stand ready to do more. His new strategy is hyper-aggressive by Japanese standards, but the U.S. Federal Reserve’s balance sheet has tripled since the 2008 collapse of Lehman Brothers. Kuroda could resurrect equity-buying, which the BOJ experimented with in 2002 and 2009.

But while Kuroda can do more, he can’t do it alone. By this time next year, big-ticket consumer purchases in anticipation of an April 2014 consumption tax increase would have come to an end. To prevent yet another slide down the deflationary slope, the Abe administration needs to aim for public expenditure-funded growth in 2014. With Kuroda’s bond buying keeping borrowing costs in check, such a strategy carries little danger, even for the most indebted government among advanced nations.

The yen sank and Japanese bond yields tumbled after the Bank of Japan announced on April 4 that it would double its monetary base to achieve its 2 percent inflation target in about two years. The base, which is the sum of currency in circulation and banks’ reserve balances with the monetary authority, was 138 trillion yen ($1.5 trillion) at the end of last year.