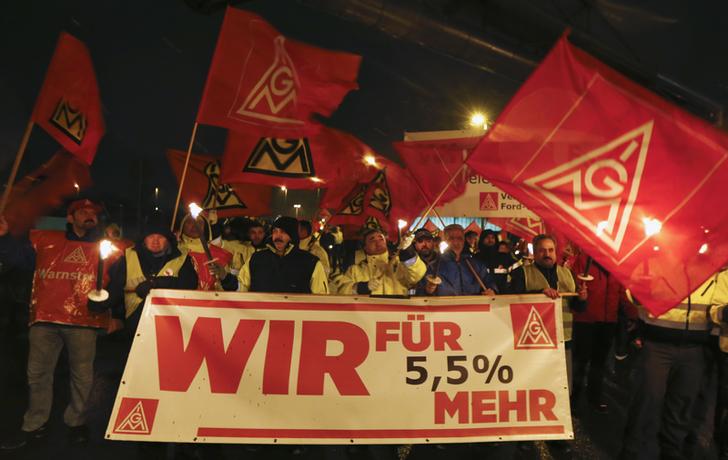 The change in Germany’s growth model has been ratified by 3.7 million people. All of Europe can rejoice.

The members of Germany’s biggest union, the metalworkers, have won a 3.4 percent pay rise for 2015. It is the biggest gain in years, and at least three times higher than the inflation rate. The deal is likely to be a bellwether for other sectors.

The agreement marks the definitive end of an era of national wage restraint. In 2009, inflation-adjusted gross salaries were 4.3 percent lower than in 2000. It took until 2014 to surpass the level of the turn of the century. Now wages are clearly moving ahead.

The IG Metall union and the employers may have been thinking of last summer’s advice from the Bundesbank. The influential German central bank called for wage increases that reflected the hoped for 2 percent inflation, plus the gains of higher labour productivity. The new deal is even slightly above this recommendation, since the OECD forecasts a 0.9 percent increase in national labour productivity.

Metalworkers’ employers may struggle a little, although the weaker euro offers some compensation. But everyone will gain from the employees’ increased spending power. Indeed, feeble household demand, once a key worry about the German economy, has faded away. Over the last five years, domestic demand accounted for two-thirds of the overall GDP growth. In the final quarter of 2014, real consumption rose by a striking 1.7 percent.

Germany’s trading partners will appreciate the deal. Higher labour costs will make it a little easier for them to compete against German manufacturers, and there will be more opportunities to sell to better paid German consumers.

The deal was agreed relatively swiftly and with only a few symbolic and short token strikes. Such efficient conflict resolution cannot be taken for granted anymore in Germany, as acrimonious and drawn-out labour conflicts involving train drivers and airline pilots show clearly. Perhaps the metalworkers’ pay deal can be a template in style as well as in numbers.

Germany’s biggest trade union, IG Metall, agreed on Feb. 24 to a 3.4 percent wage increase for one year from April plus a one-off payment of 150 euros. The deal is affecting 3.7 million workers in Germany. The union initially called for a 5.5 percent wage increase, while the employers offered 2.2 percent.

The metalworkers union also agreed with Suedwestmetall employers association on part-time conditions for older workers and job-related training for employees in Baden-Wuerttemberg, an industrial and car-making hub and home to Daimler and Bosch.