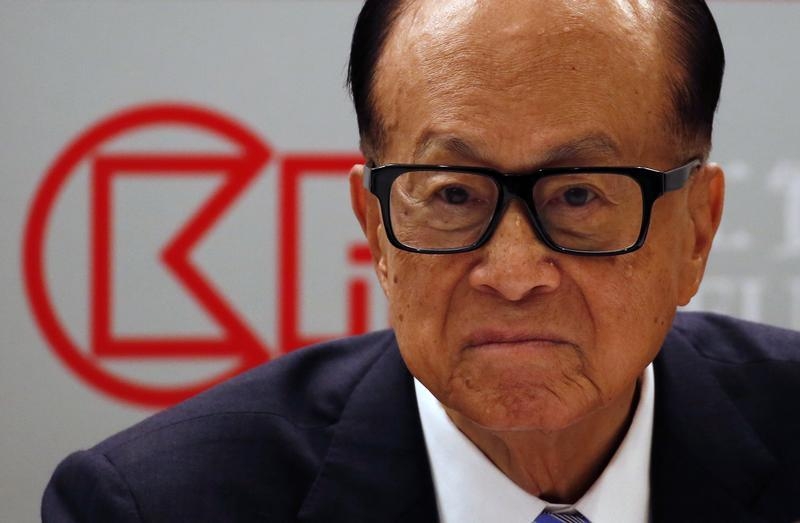 Li Ka-shing overpaid to build his European telecoms empire. Now he’s inviting outside investors to help fund a big turnaround. The Hong Kong tycoon may sell up to 20 percent of his British mobile phone unit to external backers. That would allow Li to complete the transformational 9.25 billion pound ($13.4 billion) purchase of rival operator O2 without putting in any extra cash himself.

The UK business, which is called Three, generated 686 million pounds of EBITDA in the year to December. On a 7 times multiple – the trailing average for European telecom operators – it is worth around 4.8 billion pounds. Assuming no debt, selling one fifth could bring in close to a billion pounds.

Such a sale would be the latest twist in what is already an innovatively financed deal. Li had previously agreed to sell a 33 percent stake in the combined Three and O2 to investors including the Abu Dhabi Investment Authority and Canada’s Pension Plan Investment Board for 3.1 billion pounds. A bank is putting up a further 6 billion pound bridge loan.

That already covers most of the 9.25 billion pounds Li’s CK Hutchison has agreed to pay Spain’s Telefonica for O2. A fresh cash injection could help pay for a further 1 billion pound payment that would be due to the Spanish group if the enlarged business hits certain cash flow targets or be used to reduce the debt burden.

Li still needs to get the green light from European regulators to buy O2. Assuming that happens, and CK Hutchison also sells a stake in Three, executives say they would keep the two businesses separate, despite anti-trust authorities viewing them as a single entity. This would require a reshuffle of external shareholdings to ensure that CK Hutchison’s stake in both operators remains above 50 percent.

Li is increasingly turning to outside investors to secure funding. Almost two years ago, he offloaded a quarter of his retail unit to Singapore’s GIC for almost $6 billion. Selling a stake in Three would mark the culmination of a long turnaround. Given the tycoon’s reputation for maximising value, outside investors are bold to answer his call.

CK Hutchison, the flagship holding company of Hong Kong tycoon Li Ka-shing, said on March 17 that it may sell a stake in its UK phone carrier Three to help fund its 9.25 billion ($13.4 billion) takeover of Telefonica’s O2.

The ports-to-retail conglomerate said that it was considering selling a stake in Three to a new investor with a view to further reducing the cash investment required to fund the acquisition.

Hutchison agreed in March last year to buy Telefonica’s British mobile unit for 9.25 billion pounds. It said that it could pay a further 1 billion pounds once the cash flow of the combined business reaches an agreed threshold.

In May, Hutchison agreed to sell 33 percent of the enlarged British mobile business to a group of investors including Singaporean and Abu Dhabi sovereign funds for at least 2.77 billion pounds. On March 17 it said the final price would be 3.1 billion pounds.

Alongside the news of the stake sale, CKH reported that its net profit for the year that ended in December fell 8 percent to HK$31.2 billion ($4 billion) on a pro-forma basis.

Shares in CKH were trading up almost 1 percent to HK$99.50 by mid-morning trading on March 18.