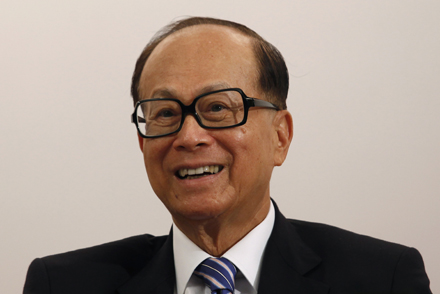 Li Ka-shing’s small concession to investors may give them a big power boost. The Asian tycoon’s Cheung Kong Infrastructure unit has slightly sweetened its offer for the 61 percent of affiliate Power Assets it doesn’t own to HK$96 billion ($12.4 billion). Though the move is designed to pre-empt a possible public showdown with minority shareholders, it could embolden them in the future.

The Li family’s latest bit of housekeeping always looked mean. There are good reasons for combining CKI, whose assets include stakes in British rail-leasing and water distribution companies, with an affiliate that specialises in power stations and pipelines. The two have teamed up on many projects. Joining forces also improves the free float: Li’s companies will hold just less than half of the enlarged CKI, down from more than three-quarters today.

However, the terms heavily favour Li. The initial nil-premium offer of 1.04 CKI shares for each Power Assets share was based on the average trading price of the stocks in the five days before Sept. 4. Now the infrastructure group is offering 1.066 shares, which is the average ratio for the preceding 30 days. It has also boosted the special dividend for Power Assets shareholders by an extra $420 million, though as the group has almost $7.5 billion of net cash on its balance sheet, this amounts to bribing shareholders with their own money.

The deal needs approval from 90 percent of minority investors to proceed, which means holders of stock worth just $1.2 billion could vote it down. CKI says it tweaked the terms after feedback from shareholders. That implies major backers are now on board. Even so, there is a case for holding out. Morgan Stanley analysts calculate that basing the deal on the relative value of the shares in the 180 days before Sept. 4 would justify an exchange ratio of 1.18.

The bigger impact of Li’s concession, however, may be felt in future deals. The tycoon has already completed a restructuring of his holding company; other transactions with listed units are bound to follow. In the past, even deep-pocketed investors would have thought twice before challenging Hong Kong’s top tycoon. That may no longer be the case. Li’s small concession may make minority investors feel more powerful in future.

Li Ka-shing’s Cheung Kong Infrastructure on Oct. 7 sweetened an offer to buy the 61 percent of Power Assets it doesn’t already own in a rare concession by the Asian tycoon to independent investors.

The increased offer values the 61 percent of Power Assets that CKI does not already own at $12.4 billion, based on current market prices.

CKI also increased the special dividend it will pay to Power Assets shareholders to HK$7.5 per share, up from the initital proposed dividend of HK$5.