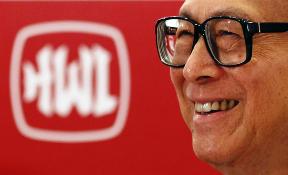 The Italian mobile business of Li’s Hutchison Whampoa could merge with the local former monopoly. The Asian tycoon may also buy out some major shareholders. This messy-sounding idea could be vetoed. But Telecom Italia lacks options and needs to end the awful status quo.

Hong Kong tycoon Li Ka-shing smiles in front of a company logo of Hutchison Whampoa Ltd. The Hong Kong blue-chip showed that it is still the name to beat when it comes to accessing the international capital markets with a resoundingly successful benchmark.

Hong Kong-listed Hutchison Whampoa is in talks to buy up to 29.9 percent of Telecom Italia, Reuters reported on April 9, citing two sources familiar with the negotiations. The plan will be discussed at a Telecom Italia board meeting on April 11, one of the sources said.
Under the plan outlined in a memorandum of understanding presented to Telecom Italia Chairman Franco Bernabe, Hutchison would transfer its local mobile business 3 Italia, which analysts value at 1.5 billion to 2 billion euros, to Telecom Italia in exchange for shares.
In addition, Hutchison is offering to buy the combined 12.1 percent owned by three Italian financial institutions, Generali, Mediobanca and Intesa Sanpaolo, at a price that could be close to a book value of 1.2 euros a share. The trio, and Spanish telephone company Telefonica, control Telecom Italia through Telco, a holding company with a 22.4 percent stake.
Shares in Telecom Italia closed on April 9 at 0.597 euros a share.
An earlier version of this article incorrectly referred to “3HG” instead of H3G in the second paragraph.