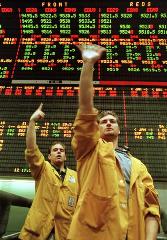 Barclays’ Libor deception is bad news for the banking industry, but the artificial quotes probably didn’t significantly distort borrowing costs or the overall economy. There may have been big losers in this scandal, but they aren’t likely to be found too far afield from other banks’ trading desks.

The numbers just don’t look large enough to matter. In one documented example, a derivatives trader put in a request to lower the input for three-month Libor, among the most popular benchmarks for floating rate debt, and it dropped by half a basis point, 0.005 percentage points. Libor was 5.365 percent at the time. Borrowers would hardly notice the difference.

The losses were diffused and infinitesimal, but the gains were concentrated, as when a scam artist collects fractions of a penny from everyone on a corporate payroll. Libor is the key rate in the $350 trillion derivatives market, so a half basis point move comes to a $17.5 billion distortion annually.

The actual gains to Barclays was much smaller than that, since it was only one of many players in the Libor market and it’s not clear how often or by how much Libor was actually moved away from the true market rate. The U.S. Department of Justice only said on “some occasions” Barclays’ submissions affected the fixed rates.

That means Barclays’ traders’ profits were probably pretty modest. On the other side, if there were substantial losers, they were probably traders at rival banks. It’s hard to work up much sympathy, especially if it turns out they were playing the same game.

As for the bank’s decision to submit artificially low Libor rates during the credit crisis, it’s hard to see how it would have had much effect on the real economy. Since banks weren’t lending to each other much then anyway, the Libor rate had become largely theoretical.

Of course, something more than money is at stake in this case. The cavalier attitude toward gaming an interest rate which underlies much of the financial system will only confirm the general public’s worst fears about banking – that it’s rotten at the core.

Barclays shares fell more than 15 percent on June 28 as investors feared the bank’s attempt to rig the London interbank offered rate, or Libor, makes it vulnerable to litigation.

Barclays shares fell more than 15 percent on June 28 as investors feared the bank’s attempt to rig the London interbank offered rate, or Libor, makes it vulnerable to litigation.