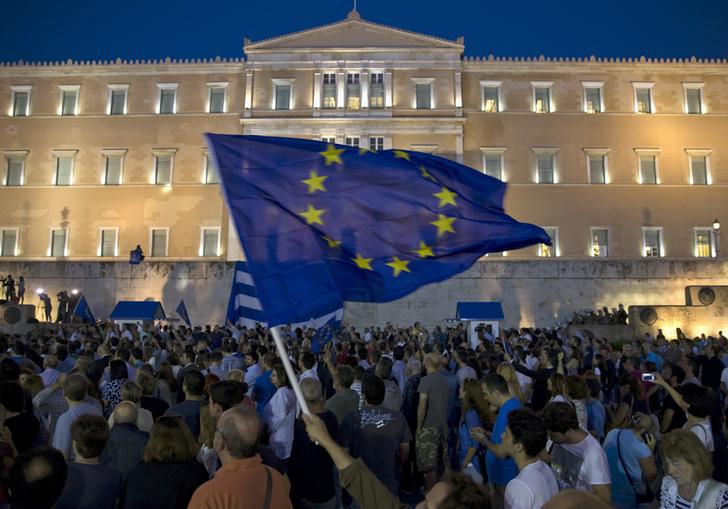 As he prepares for a referendum that could determine Greece’s future in the euro zone, Prime Minister Alexis Tsipras could seek some inspiration from Mahathir Mohamad, Malaysia’s leader during the 1998 financial crisis. Breakingviews imagines a conversation between the two.

AT: Good afternoon Dr Mahathir. Thank you for taking my call.

MM: It’s good to hear from you Mr. Tsipras. Allow me to congratulate you on your brinksmanship. You’ve surely outdone me, but I’m a little scared you have gone too far.

AT: Have no fears. The Germans will fall into line after the Greek people reject the creditors’ preposterous offer on Sunday.

MM: If that’s the case, then why are you calling?

AT: Nobel laureates like Paul Krugman and Joseph Stiglitz keep telling me Greece would be better off quitting the single currency and returning to the drachma. You were in a similar boat in 1998, when you pegged your currency after a steep devaluation and rejected the International Monetary Fund. What’s your advice?

MM: Well, I wouldn’t start from here. Though we suffered a recession it was nothing like the 26 percent drop in GDP that your country has endured in the last seven years. Besides, our external debt was 49 percent of GDP in 1998; yours is almost five times as large. It was relatively easy for me to reject the IMF’s advice because we didn’t need their money.

AT: Is it the situation hopeless for Greece?

MM: Not entirely. Your current account has swung into surplus. If you stop paying off your international debt, you could thumb your nose at foreign creditors and run a self-sufficient economy on drachmas.

AT: What should we do with the new currency?

MM: Fix it at a low rate against the euro. I imposed capital controls after all the money that wanted to leave Malaysia had already fled. Then I pegged the currency against the U.S. dollar, and we enjoyed an export boom.

AT: We don’t have much to export, but we do have tourism.

MM: Yes, and it’s your golden goose. Your creditors initially wanted to slap a 23 percent value-added tax on hotels. That was too much for tourists paying in euros. But they’ll hardly notice when they’re settling the bill in devalued drachmas. Besides, you’ll need money to fix the banks.

AT: Do we have to? We’ve managed to ignore the problem for five years.

MM: True, but only with the help of the European Central Bank. Besides, the last time I checked, Greek banks were closed. We realised that recapitalising Malaysian banks would cost 12 percent of GDP, and made the money available swiftly. Did I bail out some cronies in the process? You’ll have to ask my enemies.

AT: This is all very helpful. What about fiscal policy?

MM: It should be expansionary. You have had creditors breathing down your neck, demanding large primary surpluses in a shrinking economy. My Finance Minister, Anwar Ibrahim, had turned equally austere. He went into 1998 targeting a fiscal surplus. That’s the kind of lunacy IMF used to preach in those days.

AT: Wait until you meet Wolfgang Schaeuble.

MM: I take no pleasure in your misery. But like yours, our economy needed stimulus, not pain. So I sacked Anwar, and started running big budget deficits. I dropped the capital controls, and creditors returned. Today, foreigners own 29 percent of our sovereign debt.

AT: Hang on, didn’t you send your finance minister to jail?

MM: I did, and I don’t regret it. Dissent at that crucial time could have been costly. I don’t think you need to lock up Yanis Varoufakis. Though it would be interesting to see how he copes with a “prisoners’ dilemma” in real life.

AT: Thank you very much for your time Dr Mahathir. Is there anything you want to ask me?

MM: Just one question. What exchange rate did you have in mind for the new drachma? I’ve always fancied owning a small Greek island.

AT: Let’s see what happens on Sunday first.

A protester waves a European Union flag in front of the parliament building during a rally calling on the government to clinch a deal with its international creditors and secure Greece's future in the Eurozone, in Athens, Greece, June 22, 2015.

A majority of Greeks are likely to vote ‘No’ to the terms of a proposed bailout deal by foreign lenders, according to an opinion poll conducted between June 28 and June 30 by the ProRata institute, and published on July 1 in the Efimerida ton Syntakton newspaper.

However, the lead narrowed significantly after Greece closed its banks. Of those polled before the announcement of the bank closures, 57 percent said they would vote No against 30 percent for who would vote Yes. Of those polled after, the No’s were at 46 percent against 37 percent for Yes. A separate survey by GPO for BNP Paribas, based on a single afternoon of polling, put the Yes vote at 47.1 percent against 43.2 percent for No. GPO told Politico that the results were unofficial.

“A ‘No’ vote is a decisive step toward a better agreement that we aim to sign right after Sunday’s result,” Prime Minister Alexis Tsipras said in a television address, switching back to a combative mode less than 24 hours after he wrote a conciliatory letter to creditors asking for a new bailout that would accept many of their terms.

Greece’s European partners have warned that the referendum would effectively be a vote on whether Greece stays in the euro or returns to the drachma. On June 30, Greece became the first developed economy to default on a loan from the International Monetary Fund.