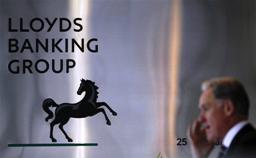 Lloyds Banking Group’s enforced branch sale is no longer a one-horse race. Back in December, the UK bank entered into exclusive talks with the Co-operative Group to sell 632 branches it was ordered to offload by the European Commission before 2014. A new offer from start-up rival NBNK probably doesn’t kickstart a hot bidding war. But it’s still good for Lloyds.

NBNK’s reappearance is well-timed. In December, the thinking was that the Co-op deal would be tied up by the end of March. But Co-op, whose bank has about 3 percent of the UK current account market, has taken longer than expected to pass through regulatory and financial hoops in order to pull off its proposed 1.5-2 billion pound deal.

In the meantime, a transaction has got easier for NBNK to swallow. Lloyds had planned to jettison 30 billion pounds of deposits but some 70 billion pounds of loans in any deal. Now it will transfer 20-30 billion pounds of each, enabling bidders to avoid a huge funding gap, and requiring only 1.5-2 billion pounds of capital instead of more than 3 billion pounds. NBNK’s latest proposal also offers Lloyds’ investors something different: by allowing them to take shares in the new entity rather than cash, bulls can participate in any upside.

As auctions go, it’s fairly lukewarm. NBNK needs to do a deal to preserve its existence. But the Co-op’s focus on its members makes it unlikely to start a bidding war. And as long as it can overcome its regulatory difficulties, Co-op’s existing retail banking presence still leaves it firmly in the driving seat – the government, itself a Lloyds shareholder, would much prefer the combined entity to have over 6 percent of the market.

NBNK has two trump cards. One is that it could use its extra headroom and capacity for synergies to spend 1.5 billion pounds buying the UK assets of National Australia Bank which, in tandem with the Lloyds assets, create an entity with the required market share. The other is that if Co-op can’t deliver then it will be the only bidder left standing.

Lloyds itself may not reap much benefit from its auction. But if NBNK does play tortoise to Co-op’s hare, at least it will still make its EU deadline.

NBNK has put forward a new bid to acquire the 632 branches Lloyds Banking Group has been ordered to sell by the European Commission.
The cash shell, chaired by former Lloyd’s of London chairman Lord Levene, has proposed a so-called “alternative demerger” structure, whereby current Lloyds shareholders would be able to choose between receiving cash or shares in the new entity.
NBNK claims it will have a “best-in-class” banking technology platform and has been in close contact with the Financial Services Authority.
Lloyds has already said its preference is to sell the branches to the Co-operative Group, or pursue a separate listing. On March 22 the bank announced that it would further update the market on progress during the second quarter. It added it remained on track to complete the transfer before the end of 2013.
Lloyds shares rose 4.3 percent to 32 pence on April 12.