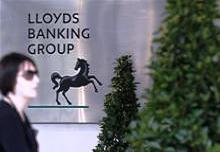 The last time Lloyds Banking Group paid a dividend, Gordon Brown was UK prime minister, Lehman Brothers still existed, and “banker” was yet to become a term of abuse. The fact the UK bank is making its first shareholder payout since August 2008 is therefore an encouraging milestone. But in valuation terms, this year’s dividend is more important.

In a sense, the 2014 dividend is more about its existence than size. It means the Prudential Regulation Authority that oversees UK banks is comfortable with Lloyds’ profitability. So it should be. While the bank only managed a low pass in December’s UK stress tests, that assessment needs to be taken in the context of its worst-case scenario planning. Actual reported figures show the group’s net interest margin – the difference between interest it takes in and pays out – has jumped 33 basis points to 245 bps in a year, and should be 255 bps in 2015. Return on equity, stripping out ongoing noise from PPI mis-selling and restructuring costs, is almost 14 percent – way above Lloyds’ 9-10 percent cost of equity.

Even so, Lloyds is being conservative – a 0.75 pence per share full-year dividend represents barely a 10 percent payout ratio on its 8 pence underlying earnings per share – and below the 1 pence forecast. Actual return on equity is still only 3 percent and while Lloyds’ 12.8 percent core Tier 1 ratio is solid, global capital requirements could rise. Net interest margins are already being hit by lower mortgage rates.

The key driver of Lloyds’ valuation is whether it can afford to distribute more than the 50 percent of earnings, as it has hinted. If it paid out half of the 5.8 pence in earnings per share expected by analysts for 2015 and long-term dividends growth of 5 percent can be assumed, the shares would be worth 72 pence based on a Gordon growth model, lower than the current 79 pence price. If Lloyds paid out 70 percent of earnings – as some expect might be possible – that climbs to 100 pence.

Ongoing regulatory uncertainties and the UK’s competition review give pause for thought. The fact that the bank is still 23.9 percent state-owned is relevant given May’s UK election. But there is handsome upside potential for investors inclined to be bullish.

Ignoring the effect of a 2.2 billion pound provision for payment protection insurance, asset sales and simplification costs, underlying profit for 2014 was 7.8 billion pounds, compared to 6.2 billion pounds in 2013. Lloyds’ underlying return on equity was 13.6 percent, against 9.7 percent the year before.

It said it will pay 0.75 pence a share dividend in respect of 2014, and said it planned to pay out at least half of its earnings in dividends over the medium term.