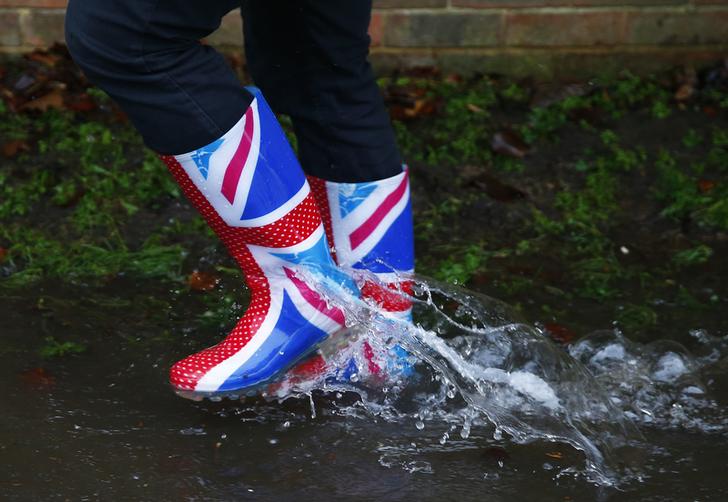 Currencies are like the British children’s game of snakes and ladders. The pound climbed a steep ladder for six months until February, and has now stepped a rung or two down. Falling UK inflation – a 1.7 percent annual rate in February – could prove its snake, prompting a slide, especially against a dollar with a foot on the ladder.

While the U.S. inflation rate remains lower, at just 1.1 percent, the trends are likely to upset a long-held market assumption that the UK would be the first major Western economy to raise rates. Investors had pencilled in the first British increase for the spring of 2015, ahead of the Americans and well ahead of the European Central Bank.

The latest British inflation number suggests that thinking needs to be revised. The further drop in inflation takes it to the lowest in more than four years and well below the Bank of England’s 2 percent target. The disinflationary forces are still potent. UK retailers continue to discount, with the big supermarkets under particular pressure from budget retailers Aldi and Lidl. And George Osborne, the chancellor, has just eased some of the green pricing pressure on energy companies.

Below-target inflation will suit Mark Carney, the Bank of England governor. He is plainly reluctant to put up rates — unlike Janet Yellen, the Federal Reserve chair whose comments at her first press conference implied that the initial rate increase could come as soon as April 2015.

With UK inflation easing and Carney dovish, markets may start to push out their expectations of a first UK rate rise. That’s a definite snake for the pound. The shift in UK and U.S. expectations could take the pound down from $1.65 now to $1.60. Against the euro, too, the pound may ease a little – especially if the ECB’s shrinking balance sheet continues to keep the euro uncomfortably strong.

A weaker pound would please Carney and UK policymakers, by assisting competitiveness and growth. UK overseas holiday-makers won’t be as happy. You can never win it all in the currency snakes and ladders game.

A resident's Wellington boots are seen splashing through water after the river Thames flooded the village of Wraysbury, southern England February 11, 2014.

The UK’s national statistics office reported that the consumer price inflation rate was 1.7 percent in the year to February 2014, down from 1.9 percent in January. The office said the largest contribution to the fall in the rate came from transport, principally motor fuels.