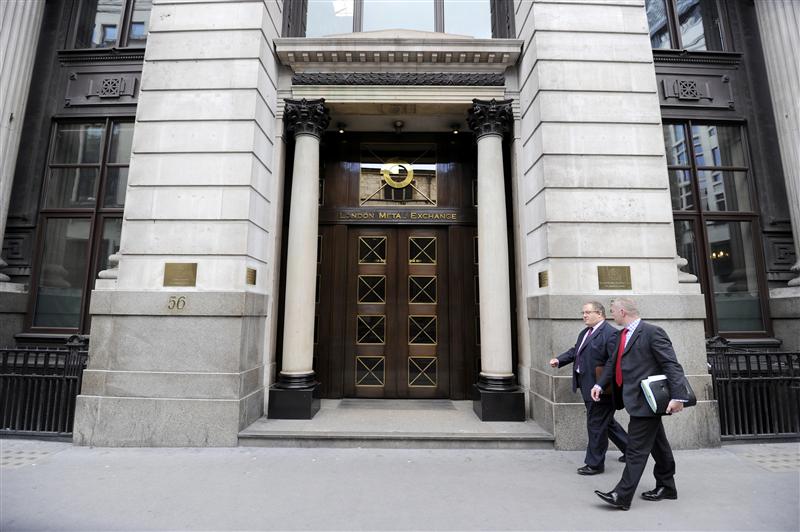 Joint bids tend to be hard. But the London and Singapore bourses may benefit by partnering in a possible $1.6 bln bid for London’s metals exchange. LSE gets a partner that already handles metals futures; SGX gets local know-how. That matters in a potentially hot auction.

Men walk past the London Metal Exchange (LME) in London, July 22, 2011. A string of warehouses in Detroit, most of them operated by Goldman Sachs, has stockpiled more than a million tonnes of the industrial metal aluminium, about a quarter of global reported inventories. The LME certifies and regulates the Detroit sheds as part of a global network of more than 640 warehouses.

The Singapore Exchange is tying up with the London Stock Exchange to make a joint bid for the London Metal Exchange, Reuters reported on Sept. 30, citing a source with direct knowledge of the plan.
The LME, the world’s biggest market for industrial metals, and one of the last open-outcry trading venues, said a week earlier that it had received several takeover approaches and was considering a potential sale.
On Sept. 29, London Metal Exchange Chief Executive Martin Abbott told Reuters in an interview that at least 10 suitors had expressed interest in the LME. It will open books to potential buyers by December, he said.
Earlier reports have cited CME Group Inc, IntercontinentalExchange, ICAP, Hong Kong Mercantile Exchange and Eurex as potential bidders, and said the exchange could fetch about 1 billion pounds.
The LME is owned by its members, with Metdist, Goldman Sachs, MF Global, UBS and Sucden Financial among the biggest holders of its “A” shares. Any sale would require the approval of 75 percent or more of “A” shareholders.