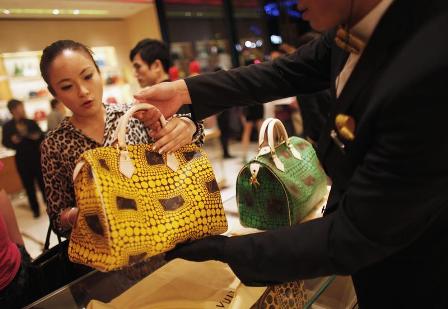 With China demand slowing and a weaker yuan, luxury brands face less fashionable growth. Since the currency’s surprise devaluation on Aug. 11, shares of brands like LVMH and Swatch who rely heavily on China’s bauble-hunters have fallen 13 percent and 14 percent respectively. Finding the right mix of scale, rising incomes and inequality for luxury’s next hotspot will be tricky.

China has gone from a blip on luxury’s radar 15 years ago to the source of a third of global sales. Burberry’s 2002 annual report gave the country just two passing references. Today it gets 40 percent of its revenue from Chinese shoppers and has 17 stores in Hong Kong alone.

The conditions for a luxury growth story are pretty specific. China for years had lively GDP growth, peaking at 14 percent in 2007, huge scale and a pool of ultra-high net worth spenders chased by a growing, covetous middle class. Urbanisation promoted the status hunger that drives luxury purchases. China’s city dwellers grew from 31 percent of the population in 1999 to 54 percent today.

India has many of the same conditions. It has the world’s fourth-largest billionaire populace, and similar growth rates to China. But low per-capita GDP and poor retail infrastructure have kept Western brands away. Louis Vuitton’s website lists only four stores in India. Just 32 percent of Indians live in cities.

Brazil has also lost appeal as its currency has fallen in value. Sliding commodity prices have hit economic growth and the weakening real means spendthrift Brazilian tourists have lost spending power. Other emerging markets are years from matching China’s heft. Nigeria has wealth but poor infrastructure. Kazakhstan has inequality, but a falling oil price means one Louis Vuitton store is already enough.

The most promising market might not be emerging but re-emerging. Consumption of luxury in the United States is set to grow 1 to 3 percent in real terms in 2015, says Bain. That’s better than the 2 to 4 percent decline forecast for China. True, real wage growth for U.S. workers was just 2.1 percent year-on-year in July. But there is a strong case for luxury goods companies to hunt closer to home.

A woman shops in a Louis Vuitton store during Vogue's 4th Fashion's Night Out: Shopping Night with Celebrities in downtown Shanghai September 7, 2012

The People’s Bank of China set the reference rate for the yuan almost 2 percent weaker against the U.S. dollar on Aug. 11, leading to a fall in the shares of luxury goods companies. Chinese consumers represent approximately 30 percent of spend in the sector.

Average short-seller interest in luxury stocks has increased by almost a third, rising to 3.9 percent compared to the consumer goods sectors’ average rising to 2.8 percent, according to Markit.