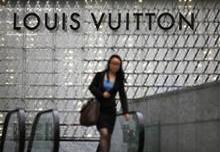 Sales growth in the French conglomerate’s flagship luxury division unexpectedly slowed in the third quarter. That knocked LVMH shares. It wants to make Louis Vuitton more exclusive and profitable. But the high-end handbag market is proving as crowded as the Champs-Elysees.

A woman walks by a Louis Vuitton luxury boutique at the IFC Mall in Shanghai June 4, 2012. REUTERS/Carlos Barria

LVMH, the world’s biggest luxury group, reported an unexpected slowdown in sales growth at its fashion and leather business, which includes the Louis Vuitton, Celine and Dior brands.
The Paris-based group, which also owns Krug champagne and Hennessy cognac, said on Oct. 15 that growth at its biggest and most-watched division was 4 percent on a like-for-like basis in the nine months to Sept. 30, against 5 percent in the first half.
Analysts estimated that the division’s organic sales growth slowed to 2 percent in the third quarter from 7 percent in the second and 3 percent in the first.
Shares of LVMH were down 6 percent at 0900 GMT on Oct. 16.