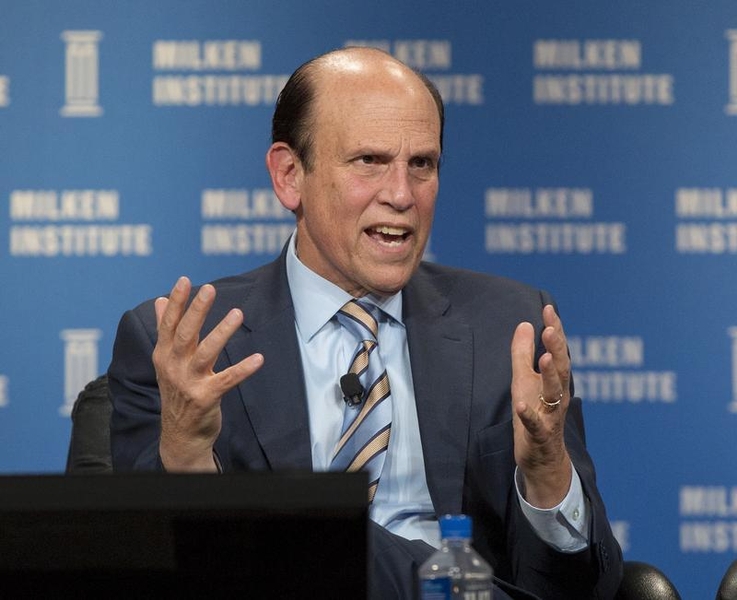 Michael Milken’s latest ball was notable for its lack of predators. The financial elite prowling Beverly Hills at the behest of the former Drexel Burnham Lambert boss whinged about everything from a slowing Middle Kingdom to hacking threats to stock price valuations. Three former Treasury secretaries lamented a dysfunctional Washington. When it came to the subject of mergers and acquisitions, however, animal spirits ran unanimously wild.

Sessions at the Milken Institute Global Conference like “Reform in China: Growing Pains for a Global Power” and “Cyber-Security: Protecting Companies and Citizens from Assault” lived up to their ominous-sounding billing. Fears about Greece, Europe, emerging markets and the U.S. Federal Reserve’s uncharted path out of its longstanding zero-interest rate policy also wafted throughout the halls and ballrooms of the same Beverly Hilton where the junk-bond king once hosted his Predators’ Ball in the 1980s.

Even an upbeat Sheryl Sandberg failed to keep the marquee event from degenerating into a therapy session on U.S. political dysfunction. “Our world needs America to be America again,” said Robert Rubin, one of the trio of ex-Treasury chiefs on stage with Facebook’s chief operating officer moderating the discussion. “The biggest risks to our relative position in the world are in Washington,” echoed Tim Geithner. Added Hank Paulson: “We can’t be successful as 4 percent of the world’s population if we’re not looking to do business with the other 96 percent.”

Dealmakers were resoundingly more bullish. There was very little “bust” or “risk” invoked during the “Boom or Bust: Opportunities and Risk in M&A” panel, and far more use of words such as “robust” and “very optimistic.”

Steve Krouskos, a senior EY executive, said 56 percent of about 1,600 C-suite denizens his firm polled expect to do a deal in the next 12 months, compared to a typical rate in the mid-30s. Citigroup investment banking boss Raymond McGuire said: “All the data would suggest that with the confidence level that exists in the mindsets of CEOs that this is going to continue for a while.” Added his counterpart at Goldman Sachs, David Solomon: “At the moment, the market is rewarding people for buying growth, which creates a virtuous cycle of more confidence.”

Buyout barons fell in with the cautious tone of the conference, however. Apollo boss Leon Black, for example, said over the last two years his firm had sold about four times as much as it had bought and cautioned that “markets across the board are priced to perfection.” TPG’s Jim Coulter said private equity simply would have to play the hand it was dealt: in his assessment, a pair of sixes. Those are lousy cards against corporate buyers playing so aggressively.