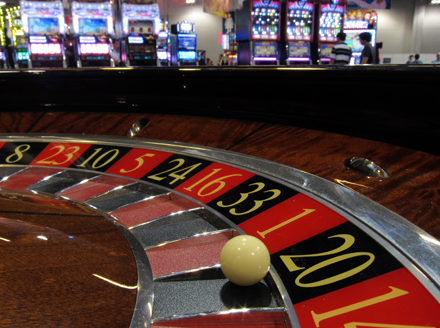 The enclave’s gambling revenue has fallen for three months, even as hotels remained full and visitor numbers grew. China’s anti-graft crackdown and weak economy deterred high-rollers. Many won’t be back. Though mass-market gamers can keep Macau expanding, the pace will be slower.

A roulette wheel in front of slot machines at Gaming Expo Asia in Macau.

Average daily table revenue in Macau’s casinos fell to HK$745 million ($96 million) in the first half of September, 14 percent lower than August’s HK$863 million, according to estimates compiled by Barclays on Sept. 16.

Gambling revenue in the world’s biggest gaming hub was 28.9 billion patacas ($3.6 billion) in August, down 6.1 percent compared to the same month a year ago. It was the third consecutive decline in monthly revenue this year.

For the eight months to August, gambling revenue for the territory rose 8.1 percent, the slowest rate since 2009.

Wynn Macau Chief Executive Steve Wynn told reporters on Sept. 23 that he was not worried about Macau’s future and called the revenue declines “an adjustment”.

“When you see that kind of adjustment, you adjust your business. You take tables away from VIP and put them into mass or premium mass,” website GGRAsia quoted Wynn as saying.