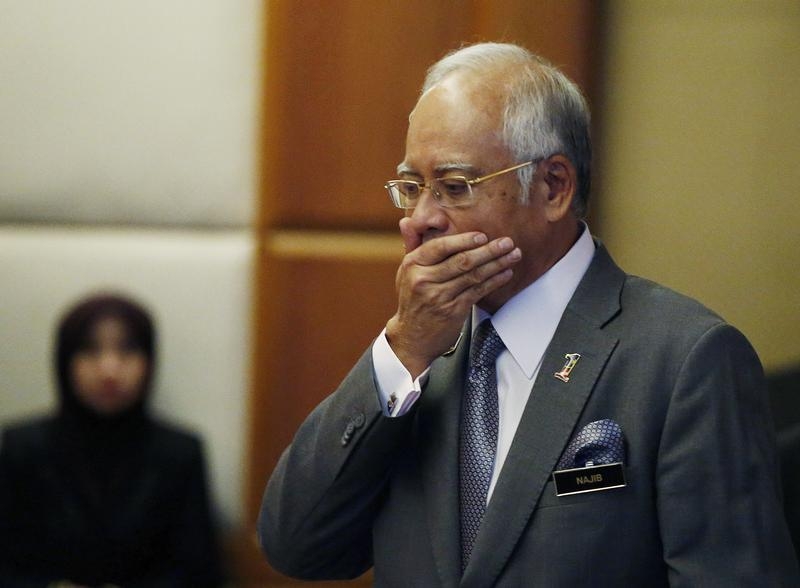 By unceremoniously dumping his deputy, embattled Malaysian Prime Minister Najib Razak has opened the door to a protracted power struggle. In doing so, he raises the prospect of lasting financial damage.

Najib denies claims that nearly $700 million has flowed from debt-laden state investment fund 1MDB to his bank accounts. He has now slowed down a parliamentary probe into the scandal, silenced some news outlets, and sacked deputy Muhyiddin Yassin for insufficient loyalty. But the latter remains No. 2 in the United Malays National Organisation (UMNO), the ruling party since 1957, and could use this position for a sustained counter-attack.

Fading consumer and investor confidence and a slumping currency could mean a long period of high real interest rates, anaemic growth and soured loans. Already, the country’s financial health indicators are flashing amber. The cost of insuring Malaysia’s debt against default has risen 63 percent in a year.

Taking a longer view, public debt has grown by 13.5 percentage points of GDP since 2007. Private credit has surged by 34 percentage points. Inflation-adjusted borrowing costs have soared, while the trade surplus has shrunk.

The last time a deputy prime minister got fired in Malaysia, investors got the rude shock of capital controls. Seventeen years later, the commodity-exporting nation has squirrelled away enough foreign assets to withstand capital outflows for some time.

Nevertheless, the stakes in the biggest scandal in the country’s history are now very high. Policies and politics will become highly unpredictable. That is likely to further unnerve foreign investors, at a time when fading Asian growth and the prospect of higher U.S. interest rates are already pulling institutional money back west. The longer the uncertainty persists, the worse the damage to Malaysia’s economy.

1MDB, a state investment fund, has debts of more than $11 billion and is being investigated for graft and financial mismanagement. Najib has denied taking any money for personal gain, saying the corruption allegations are part of a campaign to force his ouster.

The cabinet reshuffle has also halted a parliamentary probe into 1MDB, Reuters reported on July 29. Public Accounts Committee (PAC) Chairman Nur Jazlan Mohamed, who oversaw the investigation, was appointed deputy home minister, compelling him to resign from his committee post. “All proceedings that had been arranged for August, including 1MDB, will be halted until the new PAC line-up is announced,” the outgoing chairman said.

The cost of insuring Malaysia’s debt against default has risen 63 percent in a year, to 137.275 basis points, Markit prices show. The data refers to five-year credit default swaps on senior debt, denominated in dollars.