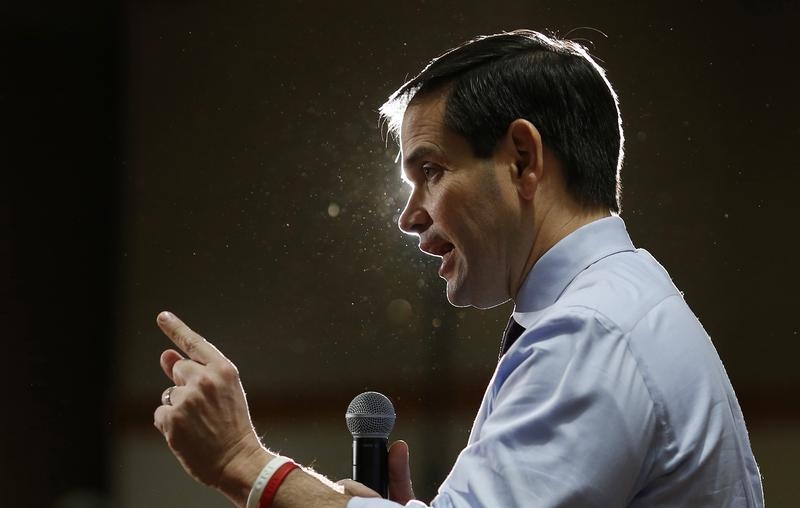 U.S. Senator Marco Rubio may have to walk a fine line with donors. The Republican presidential hopeful’s strong third-place finish was the big surprise of Monday’s contest in Iowa to help choose the party nominee. He’s the probable front-runner for the establishment’s vote, firmly pushing aside a fading rival, former Florida Governor Jeb Bush. With anti-Wall Street sentiment running high, however, its support carries risks.

Rubio has already gained the support of some of the financial world’s biggest donors, including Paul Singer of Elliott Management and Ken Griffin of Citadel. Yet contributions to his campaign aren’t overwhelming. His super PAC raised slightly more than $14 million in the second half of 2015, according to the latest campaign finance reports. Bush’s hauled in $15 million.

The unpredictable nature of the Republican race has kept many backers on the sidelines. For example, Doylene Perry, the widow of Texas builder Bob Perry, has yet to step forward even though she and her husband were one of the top GOP contributors in 2012.

Others have supported candidates who dropped out of the race. Marlene Ricketts, the wife of TD Ameritrade founder John Ricketts, gave millions of dollars to long-departed candidate Scott Walker, the governor of Wisconsin. And mogul Sheldon Adelson, who shelled out more than $90 million to Republican groups in 2012, may be on the fence, meeting often with Rubio while giving $2,700 to Senator Ted Cruz last November.

The big money presents a bit of a conundrum for Rubio. Rivals Cruz and Donald Trump tout their independence from big banks and other denizens of Wall Street. Trump, in particular, has bragged that he doesn’t even need the money. The billionaire may now harp on that point even more with Rubio on the rise.

The Florida senator could be vulnerable. He has, for example, called for repealing a number of the Dodd-Frank Act’s restrictions on banks. On the other hand, his tax plan makes at least a vague reference to eliminating a loophole that benefits private equity and hedge fund managers.

Rubio’s opponents will surely aim to play up his connections with Wall Street. His biggest challenge, though, may be to avoid biting the hands that feed him.

U.S. Senator Marco Rubio of Florida placed third in the Republican Iowa caucuses with 23 percent of the vote and nearly tied billionaire Donald Trump for second place. The two candidates each nabbed seven delegates in the first ballot of the race to become the Republican nominee for U.S. president.

Fellow Senator Ted Cruz won the Iowa contest with 28 percent of the vote and received eight delegates. Former Florida Governor Jeb Bush, who was once the Republican front-runner, came in sixth place with 3 percent of the ballot and won one delegate.

The candidates are now campaigning in New Hampshire for that state’s primary next week.