Where his mouth was 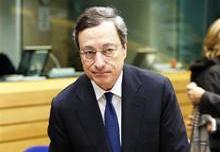 Mario Draghi’s words were enough to keep the euro zone together in 2012. In 2013, his actions will have to speak louder to consolidate the fragile state of the monetary union. The president of the European Central Bank will have to make good on his bond-buying pledges, guide the new common banking regulator’s tentative first steps, and show what he can do to foster growth in the region.

Draghi’s mere promise of “outright monetary transactions” (OMT) – unlimited buying of the bonds of indebted countries struggling with highs yields – were enough to calm markets. But it raises a problem: a country such as Spain is now under less pressure to request that new type of bailout. Yet Spanish borrowing costs haven’t come down enough and still hurt the economy. Draghi’s task is to convince Madrid to accept the ECB’s intervention. Even then, he won’t be in a risk-free zone. He must make sure that Madrid won’t slow down on reforms. Then there’s the question of how northern European countries will react if bond-buying becomes massive.

The second of Draghi’s challenges is the creation of the euro zone’s single banking supervisor, which should be up and running in 2014 and will operate under the ECB’s general authority. The supervisor will have to overcome domestic vested interests, and spot troubles before they happen. Draghi will have to engineer the necessary strict separation between the new institution and the ECB’s governing bodies, and make sure that concerns about the banking system will not influence the determination of interest rates. And he will have to ensure the credibility and authority of the new supervisor over the 17 different national banking regulators. No easy task.

Last, Draghi needs to show he can do more to boost growth than repeating that austerity and “structural reforms” are enough. The EU’s economy is still flat, all of its members are facing high unemployment and a credit crunch. Draghi could come under pressure to take more drastic action, for example by providing banks in peripheral Europe with ultra long-term, cheap loans, or targeting its action so that credit flows to small and mid-size companies. Once interest rates have been lowered further, which looks unavoidable, pressure may build for more controversial action, such as money printing or cutting deposit rates below zero. This could divide the governing council. Draghi may first want to see how the OMT will work; which brings him back to problem number one.