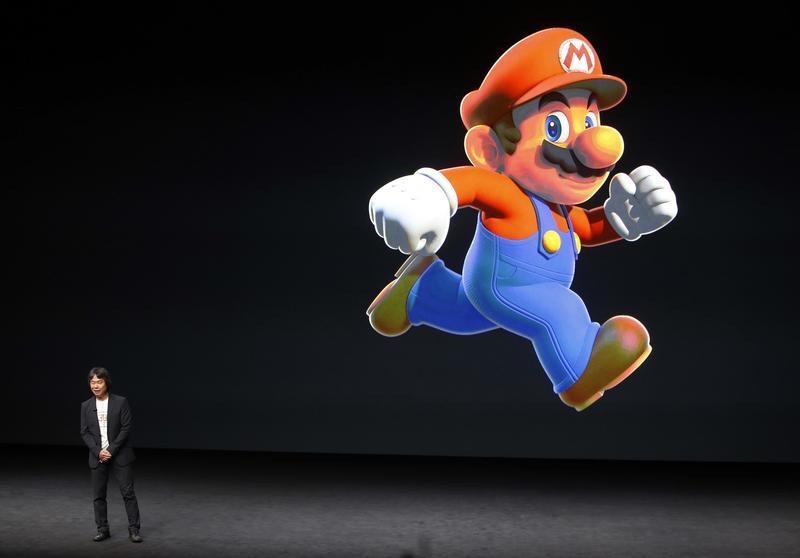 Super Mario takes Nintendo up a level in mobile gaming. The portly plumber made an unexpected cameo at Apple’s latest handset launch, with news that the first smartphone game starring Mario will go live in December. Following the wild success of the Nintendo-backed Pokemon Go, this confirms the Japanese group is no longer dragging its feet on reform and is ready to use top characters on mobile.

By noon in Tokyo on Sept. 8, Nintendo shares had leapt more than 13 percent, adding nearly $4 billion in market value. The stock now trades at 38 times next year’s expected earnings, although those estimates may need to be revised upwards. That’s a big reward for a slick but pared-back freemium game, designed to be played with one hand, while the player clutches a burger or holds onto an escalator handrail with the other. And at first, it seems odd this was not already in the price.

That’s because Nintendo’s push into mobile has been a long time coming. For ages the hardware-focused group feared low-cost mobile titles would eat into lucrative sales of consoles and games. But it has already been 18 months since Nintendo, facing shareholder pressure, partnered with mobile-specialist DeNA to develop smartphone games.

And more recently, Pokemon Go has been pretty strong proof that this pivot could work, even if Pokemon is not wholly owned by Nintendo. The augmented-reality smash has now garnered half a billion downloads. Nintendo-watchers have assumed other well-known titles like Mario and Zelda would eventually follow Pokemon onto handsets.

All that said, there was no certainty Mario games were underway, and some worried Nintendo might prioritise minor titles instead. Gatecrashing the iPhone launch, the technology world’s biggest set-piece, refutes that. This suggests Nintendo understands that it needs to use core intellectual property if it wants these mobile titles to make waves. “Nintendo’s management has finally come to its senses,” says analyst Pelham Smithers, writing for SmartKarma.

Estimating the precise financial boost will rest on download levels and pricing. But strategically, it is clear that Nintendo has enjoyed a power-up.

"Super Mario Run" will launch on Apple devices in December. A limited version will be free to download.

"Super Mario Run" will launch on Apple devices in December. A limited version will be free to download.